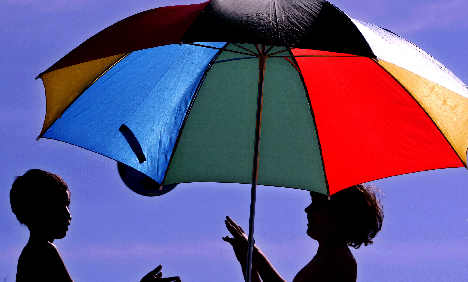 The Munich toddler was playing outside with her favourite toy on Saturday evening, when she popped it into the tube of her family’s parasol. When reached down to remove it, her arm became lodged inside the tube.

The toddler’s parents tried to free her but their efforts were hampered by the child refused to let go.

When further attempts proved futile, the decision was made to call the fire services.

Firefighters arrived shortly afterwards and employed a saw to free the child who – along with the toy she was still clutching – survived the incident unscathed.

Both the toddler and the action figure were brought to a children’s hospital as a precautionary measure.

The child’s motive for depositing her toy in the tube in the first place remains unclear. And although parasols are not widely considered to be dangerous, accidents involving umbrellas are not unheard of.

In Delaware in 1991 a gust of wind blew a 485-pound umbrella, which was part of an artistic exhibit, across the road, killing a woman and injuring two others.