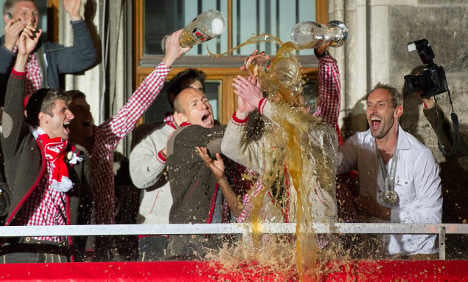 Schalke, who earlier announced that coach Jens Keller would be staying at the club after agreeing a new contract through to the summer of 2015, knew that a win at home to Cup finalists Stuttgart could seal fourth place and a return to Europe’s leading club competition in the process.

However, a goal in each half from Bosnian striker Vedad Ibisevic gave Stuttgart a 2-1 victory in Gelsenkirchen, with a late own-goal by Stuttgart goalkeeper Sven Ulreich providing scant consolation for the hosts.

“We were in the game but fell into some old habits,” said Keller.”But the team still showed character.”

Meanwhile, Eintracht Frankfurt, whose coach Armin Veh had at one point been linked with a switch to Schalke, drew 1-1 away to Werder Bremen with Srdjan Lakic earning the visitors a draw at the Weserstadion after on-loan Chelsea starlet Kevin De Bruyne had put Bremen ahead.

That result effectively ends their chances of fourth place but Freiburg are still right in the hunt after coming from behind to win 2-1 at relegated Greuther Fürth thanks to second-half goals by Jonathan Schmid and Max Kruse.

The club from the Black Forest, who are more used to battling against relegation, survived a late scare when Nikola Djurdjic’s penalty was saved by goalkeeper Oliver Baumann.

That sparked huge celebrations in the visitors’ camp as, while they are still a point behind Schalke, the two clubs meet next weekend in what will be a direct shoot-out for fourth spot.

Bayern kicked-off their title party by disposing of Bavarian neighbours Augsburg 3-0 at the Allianz Arena as Thomas Müller, Xherdan Shaqiri and Luiz Gustavo scored to give the champions yet another victory in their record-breaking campaign.

“It’s never easy when you are preparing for the title celebrations and you are playing a team battling for survival,” said Bayern coach Jupp Heynckes.

“The team was a little below par but our season will go down in history.”

While Heynckes’ side got their hands on the ‘Salad Bowl’ trophy, their future opponents in the Champions League final, Borussia Dortmund, ensured that they will finish second after coming from 3-1 down to draw 3-3 away at Wolfsburg.

Sven Bender put Juergen Klopp’s side ahead before a brace from ex-Dortmund man Ivan Perisic and a goal from Brazilian defender Naldo had Wolfsburg ahead at the break.

However, Marco Reus netted twice in the final six minutes to earn Dortmund a share of the spoils.

At the bottom, Hoffenhiem are two points from safety after suffering a 4-1 defeat at home to Hamburg. They must now win their final game of the season away to Dortmund and hope that Fortuna Düsseldorf and Augsburg both slip up if they are to survive on the last day.

While Augsburg were losing in Munich, Düsseldorf went down 2-1 at home to

Nuremberg, but Werder Bremen are now safe after their draw with Frankfurt.

In other games, Jens Hegeler scored twice as third-placed Bayer Leverkusen beat Hannover 3-1 while Swedish under-21 international Branimir Hrgota netted a hat-trick as Borussia Mönchengladbach won 4-2 away at Mainz.

However, the Foals, who will host Bayern next weekend, would need a huge swing of results in their favour on the final day of the campaign if they are to qualify for next season’s Europa League.