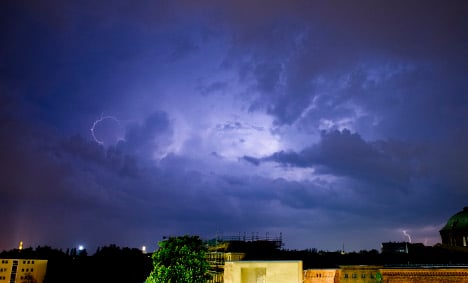 The next few days will be marked by changeable weather, storms and rain for most of the country. But some of the most dramatic bad weather hit on Thursday – a national holiday – with storms and showers setting in across all regions except the west, and high winds in the east.

In one incident on the national holiday, 43 people were injured, three of them seriously, when lightning struck an electricity junction box at a fairground near Dabel in Mecklenburg Western-Pomerania, wrote Focus magazine on Thursday.

Friday will see the storms calming a bit in most areas, but being replaced with heavy, constant rain in the far south – up to 30 litres could fall in a few hours, said the DWD.

Meanwhile, the north will sit under heavy clouds but will get away with just the odd shower. The rest of Germany should see a cloudy, muggy but dry day, with highest temperatures up to 20C along the Elbe river.

By Saturday morning, things will seem friendlier, with any fog gathering overnight set to clear for a cheerful start in many areas. Later, though the cloud will return, bringing the odd shower and isolated storms in some places.

Sunday will be just as changeable with the by now familiar heavy cloud and on-off showers and storms in most areas. Highest temperatures will be around 17C in the east, said the DWD.