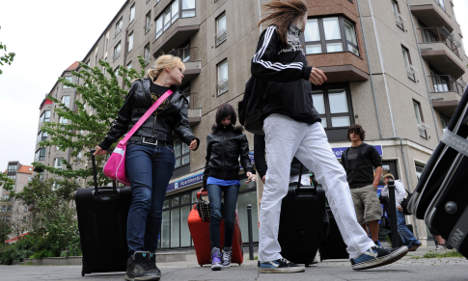 As of 2015, tourists will no longer be allowed to stay in holiday flats in the city centre, wrote the Tagesspiegel newspaper on Wednesday.

Travel agents will no longer be able to buy up flats in central areas of the city – principally in the Mitte district – to use them as tourist lets. Instead, they will be reserved for normal tenants.

The measure comes in a series of changes to real estate laws approved by the Berlin Senate this week to address what building senator Michael Müller called “speculative vacancy”, in the face of the perceived flat shortage of flats in the capital.

Around 40,000 new flats were also approved to be built by 2025, many of them in central areas likely to be unpopular with locals. Around 3,500 new flats are due to be erected along the banks of the Spree river alone and a further 4,800 on the former Templehof airport, currently used by Berliners as a large park.

Good news for Berlin residences is that rent rises across the city are to be limited to 15 percent over three years, down from the current cap of 20 percent.

Tenants of inner city flats, meanwhile, have longer – they won’t experience more than a 15 percent rise over four years. Also, the amount tenants can be asked to contribute to renovation costs has been capped at nine percent of the total cost, down from the current 11 percent.

The plans have proved contentious with estate agents, who indicated to the paper they would mount a legal challenge on the basis that the Senate has not presented sufficient evidence of Berlin’s housing shortage being that dire.