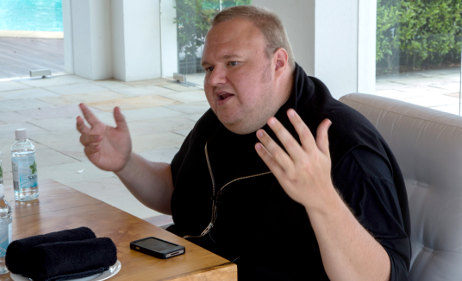 New Zealand-based Dotcom launched a “white paper” to coincide with a visit by Holder to Auckland this week claiming the case against his now-defunct Megaupload empire was baseless and did not stand up to legal scrutiny.

In the document, Dotcom’s lawyers argued Washington had bowed to pressure from the film industry to pursue Dotcom for alleged copyright infringement because it was a major contributor to Democratic Party coffers.

Holder rejected the accusation, saying intellectual property theft was “something that we take very seriously”.

“That’s not true,” he told Radio New Zealand when asked if the administration was pressing the prosecution to keep Hollywood on side.

Dotcom, a German national with New Zealand residency, was arrested in an

armed raid on his Auckland mansion in January last year and his Megaupload empire was shut down.

US authorities allege Megaupload and related file-sharing sites netted more than US $175 million and cost copyright owners more than US $500 million by offering pirated copies of movies, TV shows and other content.

The US Justice Department and FBI want him to face charges of racketeering fraud, money laundering and copyright theft in a US court, which could see him jailed for up to 20 years if convicted.

Holder said the United States would continue with an application to extradite Dotcom from New Zealand, which is due to be heard in August.

“We have an existing treaty between the United States and New Zealand that’s been used many times over the years,” he said. “I don’t see why any individual would not be subject to that treaty.”

The case in New Zealand has suffered a number of setbacks, including a court ruling that the police raid was illegal and revelations Dotcom was unlawfully spied upon, but Holder said he was satisfied with cooperation from local authorities.

“I think that we’ve got good cooperation from our allies here in New Zealand. There are things that they’re working their way through the New Zealand court system,” he said.

“But we’ve had good communication and at the end of the day it will be an appropriate result.”

Dotcom, who denies any wrongdoing, is free on bail ahead of the extradition hearing and has started a new file-sharing venture called Mega.