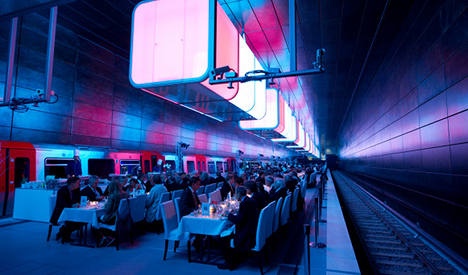 The HafenCity University station, on the city’s U4 line, was fitted in April with 12, 6.5-metre-long shipping containers hanging from its ceiling. Each container acts as a giant light which changes colour on the hour, the Hamburger Morgenpost regional paper reported on Wednesday.

The classical music of Verdi, Bach and Brahms wafts down the tracks to set different moods and match the changing light – which a panel of light designers have honoured with the 2013 “Light Project” award.

“You don’t expect to see such lighting in a U-Bahn station. It is magnificent and magical,” the jury’s statement said. It added that it embodied how light can transform a functional area into something incredible.

Gerd Pfarré, the brains behind the piece, accepted the award in Philadelphia.