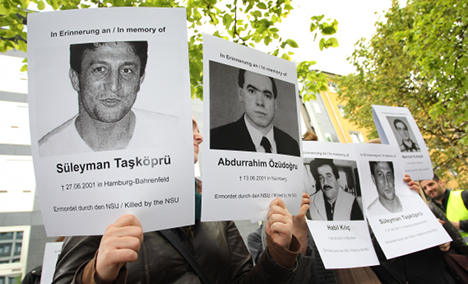 After a series of racially motivated crimes unique in Germany’s post-war history, the justice system showed – by its assignment of the places to witness the trial, and the fact that there were far too few of those places – how much public interest is seen as appropriate.

No matter which valid, internal reasons there may have been, the refusal to hold the trial in a larger place even if one not situated in a justice building, sends a message: don’t make such a fuss, this is business as normal. We’re doing what we always do.

But it is so obvious that this is not a normal trial that one must ask oneself why so much effort was made ahead of time to demonstrate the opposite. Possibly because those who make decisions in Munich simply don’t think any differently than those people in whose names they will deliver a verdict? The victims of the murder series were, apart from police officer Michéle Kiesewetter, migrants.

People like them now make up a fifth of the German population, but in public discussions they practically only ever appear as problem groups. When a Ghanaian engineer or a Turkish tailor with a decent income and well brought-up children is mentioned, they have the label “exception” either explicitly or implicitly attached.

But the NSU murders dramatically showed that it is not they as a group who create problems, rather it is they who have problems as a group, independent of their academic qualifications, income and lifestyle – simply because their accent, darker skin or a non-European name make them part of “the other”.

Their problems are prejudice, mistrust, rejection – or also deadly hate. The NSU is not alone – 152 people have been wiped out by far-right violence since German reunification – our Tagesspiegel colleague Frank Jansen has researched this for years.

Many of those whose right to life was negated by the killers were homeless people, punks, left-wingers but remarkably many were killed because they were not called Müller, Meier or Schmitt. And it speaks for itself how often the authorities, police and government closed their eyes to this racist background – not even half of the 152 have been officially recognized as victims of the far right.

The religion monitor project of the Bertelsmann Foundation has recently again shown how strong this rejection is – although a majority in Germany welcome diversity, 51 percent see Islam as a threat.

This marking out of people as Muslims, foreigners or Turks has become stronger over the last few years. At least partly to blame for this is, paradoxically, the integration debate that was as needed as the modernization process from which it came.

Muslim as a label

Just to name two examples – of course a democracy must reform its citizenship laws if the danger emerges that a growing part of its population is being shut out of the political process because they have no right to vote. And of course schools need to be reformed when the number of students shrinks and the children are increasingly without the basic abilities on which German education is built.

The constant public conversation about the diversity of society has continually also created groups which do not actually exist – we talk about “the Muslims”, but what does that say about a person? They are also mothers, fathers or singles, unemployed or good earners, professors or tradesmen – and they are not even all religious. Does professional, familial and economic status have less influence than religion?

The label “Muslim” says little about the person it is stuck upon. Yet it can make the actual person, their character and abilities disappear and significantly reduce their chances in life – the chances of finding work and friends.

The United Nations, as it recently criticized Germany over its reaction to the Thilo Sarrazin case, said the country’s institutions, for example the justice system, was not offering enough protection against racism and that racism here is too often reduced to anti-Semitism.

Structural, not personal racism is key

Racism is a word which provokes the strongest defence in Germany. That may be due to a sensitivity related to the National Socialist past and our pride in having engaged with it. But it is also connected to a lack of coolness – whoever hears “racism” feels personally attacked.

Yet rather than personal racism, it must be about structural racism – that is in authorities, laws and institutions, sitting in the wallpaper of a society.

That can be the lack of legal steps taken against a provocateur as criticized by the United Nations – but also too few migrants in police uniforms, behind the desks at authorities, and also in newspaper offices, because it signals to the citizens, readers and people who have been here for ages as well as those who have migrated here, that the state is not made by the “others”.

The German Islam Conference which meets this week has paved the way for Islamic theology to be taught at state universities, accelerated agreements about religious education, as well as helping to a large degree, to establish representatives of German Islam as players in democratic public life.

It is possible to tear off the old wallpaper. The NSU trial would be a good opportunity to take a look around oneself. After the murders were discovered questions were not only asked about individual racists – the perpetrators – but also about structures.

Discrimination must go to the top of the agenda

Why did the investigation go so wrong? Why did the information and clues from the wives, sons, daughters and friends of the dead play practically no role, even though they kept on suspecting xenophobia as a motive and said so? And why did those who wrote the headlines about “Kebab murders”, or read them – pretty much all of us – doubt the official version of criminal backgrounds, debts and red-light connections so little?

These are questions which the trial in Munich cannot answer, may not even ask. It has to determine individual guilt. It remains to be hoped that the work is not restricted to this trial – that the face of Beate Zschäpe is not reduced to a pictogram which makes one believe that everything has been done when she and her four alleged helpers receive their verdicts.

It is time that Germany starts to put discrimination right at the top of the agenda – and replace the stale debate about integration with one about racism. Not to pick out individuals, but to highlight everyday practices and routines that discriminate.

For those who get goosebumps when the R-word is mentioned – it is only about breathing life back into a document which this month turns 64. It is the Constitution of the German Republic – which says, “No-one may be disadvantaged or favoured due to their gender, ancestry, race, language, homeland or origin, their faith, religious or political beliefs.”