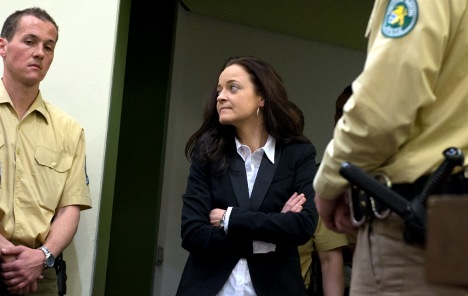 But Beate Zschäpe, 38, the woman at the centre of the case, was the picture of calm, with a hint of a smile, as she entered the courtroom.

Zschäpe – best known to the public looking dishevelled in a 2011 police mugshot after her arrest – now sported a smart black pantsuit, pressed white shirt, earrings and a glossy new hairstyle.

Outside, protesters waved red and white Turkish flags and held large black-and-white photos of the 10 victims whose deaths between 2000 and 2007 were blamed on the self-styled National Socialist Underground (NSU), of which Zschäpe was a founding member.

Relatives of many of the victims — eight of the victims had Turkish roots, one was a migrant from Greece — had arrived by bus, including Ismail Yozgat whose 21-year-old son died in his arms after being shot twice in the head.

Some newspapers have portrayed the woman from the former communist East Germany as “evil incarnate,” according to one of her lawyers, and one protest sign labelled her the “Hitler-child Zschäpe.”

But the chief defendant, who has not spoken publicly since her arrest, has signalled through her defence team that she intends to maintain her wall of silence. If found guilty, she could spend the rest of her life in jail.

As lengthy procedural statements were read out, Zschäpe’s gaze blankly wandered across the visitors’ gallery where many victims’ relatives saw her eye-to-eye for the first time.

Among the plaintiffs Monday was Semiya Simsek, a young woman whose father Enver was the first victim of the neo-Nazi killer trio in 2000.

“She wants to know why it was her family that was affected,” said her husband outside the court. “How could they kill so many?” read a banner held up by ethnic Turkish protesters outside. Others read: “Together in the battle against racism” and “Opportunity for justice”.

In a brief scuffle in the morning, two young women broke free from the demonstration, smashed a bottle on the street and rushed toward the court before they were held back by police.

Security services were taking no chances for the trial, fearing pro- and anti-neo-Nazi violence.

Police deployed 500 officers plus private security guards, and had sealed off the perimeter earlier, banning cars and even bicycles from parking in the area.

The trial, Germany’s biggest anti-terrorism case since members of the left-wing Red Army Faction were in the dock in the 1970s, is expected to last well into 2014.

In all, 80 victims and relatives of those killed, represented by about 60 lawyers, will join in the trial, as will 600 witnesses.

Zschäpe, who was taken to court in an armoured black car but wore no handcuffs in court, is the main defendant accused over conspiracy to commit the murders and terrorism and arson charges.

Four co-defendants face charges of having supported the NSU. Two of the men wore sunglasses and covered their faces with folders as they walked into the courtroom.

The mammoth proceedings are being held in a courtroom with only 50 seats for the media and 50 for members of the public, most of which were also taken by journalists on Monday.

The first to queue up for one of the public seats was 68-year-old pensioner Helmut Sieber, who had arrived on Sunday, more than 20 hours before the start of the trial.

Asked why he came so early, he told AFP: “I don’t want to give the Nazis an opportunity to get inside.”

The case adjourned in the afternoon until May 14th. Proceedings had been due to continue Tuesday and Wednesday.

They argue among other things that he is biased in insisting that the defence team undergoes security checks on entering the court while prosecutors, police and others are not required to be searched.