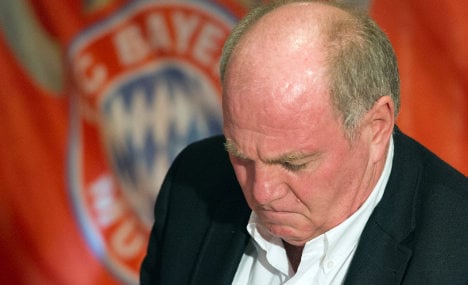 Hoeneß, 61, revealed this month he had turned himself in for dodging taxes and paid an advance fine payment running into millions of euros.

Now he has confirmed to Die Zeit newspaper, rumours that he received millions from his super-rich friend Adidas CEO Robert Louis-Dreyfus back in 2000 so that he could continue gambling on the global stock market.

In the full interview due to be published in full on Thursday, Hoeneß admitted he had had a gambling problem.

“In years 2002 to 2006 I really gambled, at times I traded day and night; they’re sums which are difficult for me to comprehend now, they were at times very extreme. It was the kick, pure adrenaline,” he told the paper.

His gambling had begun much earlier, he revealed, at the time of the dotcom trading bubble in the 1990s.

“When the bubble burst I lost a lot, I was really numb. That was the moment when Dreyfus offered that we would do something together, he would finance it,” said Hoeneß.

“That’s how the millions got into the account, it was always clear that was an account for gambling, nothing else,” he added, but denied that the money had at any time been linked with the FC Bayern club or that he had had any other undeclared accounts.

Hoeneß said his gambling had finally to stop when the 2008 crash brought all speculation to an abrupt end.

“I lost too many times. I couldn’t gamble so much anymore. And then came the 2008 financial crisis, and it all finally tumbled down.”

Now, however, at the ripe old age of 61, Hoeneß said he felt time had cured him of his addiction.

“I don’t think I’m ill. At least not anymore. If I have to go to court I won’t be appearing as an ill man. For a couple of years I was probably close to that. But now I think I’m cured,” he said.

“I’m not constantly on the search for a big kick like before. I’m getting older. I’m 61 years old,” he added.

The disgraced club president told the paper he has been suffering under the weight of his actions, but denied that he was a bad person.

“I committed a great folly, a huge mistake, which I want to correct as best I can,” he said. “I messed up really badly but I’m not a bad person.”