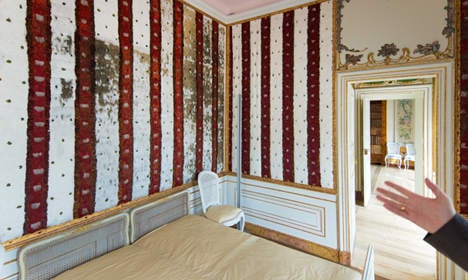 A room in the Moritzburg castle, Saxony, has been restored to its original glory after experts worked for nearly three years sticking on 24 kilogrammes of peacock, goose, pheasant and mallard feathers to its walls.

Thought to be one of the only feather-papered rooms in the world, the World Monuments Fund (WMF) and a regional Sparkasse bank donated €1 million in 2010 to make the project a reality.

A few photos of the Moritzburg castle

The room is “a symbol of German cultural heritage,” said president of the WMF board Bertrand du Vignaud on Tuesday at its unveiling. And for Saxony’s head of state owned castles and gardens, Christian Striefler, “it is a dream come true.”

Visitors will be taken round by a guide, not only to the feather room but also to a newly restored bedroom, which has straw carpets and silk walls. Entrance is €5.50 for adults and €3.50 concession and tour groups are capped at 10 people.