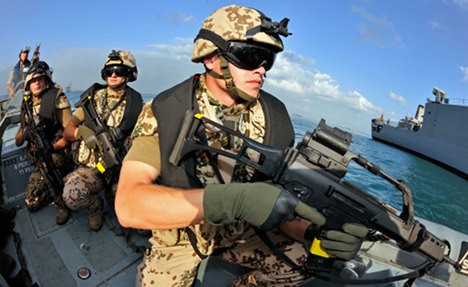 As members of the German army, Bundeswehr, soldiers are not allowed to work as mercenaries for private companies – yet many are doing it, Frankfurter Allgemeine Zeitung (FAZ) found out.

Exact figures on how many of Germany’s soldiers, or former soldiers, work the private security circuit are unknown. According to the FAZ’s research, the field is growing and critics are warning of a “mercenary renaissance”.

In response to a written request for information from the Green Party last year, the government revealed that there were at least a dozen registered mercenary companies in the country alone.

One such firm told the paper that although they did not advertise jobs, it received three applications each day – mostly from soldiers. Those given a job are often sent to guard ships or to pick up the slack in combat zones.

The paper said guarding German freighters off Africa, where piracy is rife, was a common gig. Last spring the government passed a law saying its country’s ships were allowed to have armed protection – but the idea was not that German soldiers should do it in their spare time.

And though ships can be owned by German companies, many fly under a different national flag – largely Liberia, Antigua or Barbuda, which have different laws on what weapons guards can use.

Identified only as Till, an ex-Bundeswehr soldier turned ship security guard told the FAZ that when working at sea he worked with automatic weapons that are banned from German-flagged ships.

Till, like others working the ship scene, earns around €6,000 for a six-week trip – far more than he would have for the same tour of duty with the Bundeswehr. He is no longer in active service due to post traumatic stress syndrome, but by law soldiers have to tell the army if they are working for a private security firm for five years after leaving.

An army paramedic identified as Marcel K., told the FAZ that when working on ships his colleagues had included soldiers, police officers and customs workers. Most were, he said, looking to make extra money. He soon found that he could earn more money working freelance on land – being a “combat medic” in a war zone could get him €8,000 per month.

He added that in his experience, mercenary soldiers did not fill the testosterone-fuelled, trigger-happy image portrayed in the media. Rather, most tended to be family men out to earn extra money, or adventurous types in it for the experience.

Outside of Germany, security firms in Britain and the US are said to be fond of hiring German military personnel – particularly elite soldiers – although the country’s defence ministry denied knowledge of this.

A spokesman from the ministry contradicted the newspaper, saying it knew of “no active soldiers working for private firms.” But while soldiers are well-informed of what they may and may not do, the army does not keep tabs on them during leave.

Soldiers wishing to work elsewhere may only do so with permission from their superiors, but since the defence ministry said there were none registered this suggests that the “dozens” cited by the FAZ were doing so illegally.