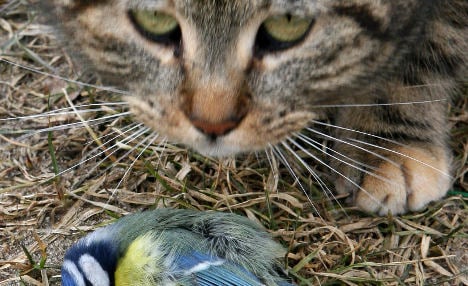 Peter Berthold, head of the bird keepers at the Max Planck Institute for Ornithology in Radolfzell on Lake Constance, says cats kill around 50 million birds a year in Germany along.

Enough is enough, he told the Frankfurter Rundschau newspaper.

“Sometimes they kill a wonderful red-coloured bullfinch, or a wryneck, which could be the last in the district,” he said. An “ecological compensation tax” could be the answer, he suggested.

He referred to an American study published at the start of this year in the journal Nature Communications which showed what damage US cats do to the wildlife there.

Each one kills at least 40 birds a year – as well as around 200 small mammals such as mice, and a large number of lizards, snakes and even butterflies.

“Cats are opportunists, they will simply hunt what they see in front of them – thus the most common species,” Hannes Huber, spokesman for the German nature protection charity NABU.

“This can be particularly difficult for ground nesters,” he added. But he said he did not think the effects were particularly grave.

A cat tax could even make the situation worse, warned Thomas Schröder, president of the German animal protection association. “Considering the experience we have had with dog tax, we would fear that the introduction of a cat tax would mean many animals would suddenly be thrown out, or given to animal shelters as the owners would not want to, or be able to cover the extra costs.”

This could lead to more feral cats being on the prowl and feeding on feathered victims, he suggested.