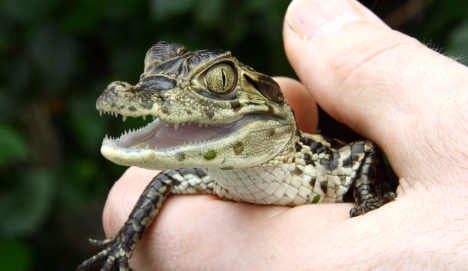 Around 1,300 people live in the Brandenburg village of Golzow – including Karl-Heinz Voigts who, thanks to remarkably lax local laws on keeping exotic animals, has amassed a collection of 21 crocodiles.

The 56-year-old first got one in 1987, while the village was still behind the Iron Curtain. Now, along with his 20 rabbits and a bunch of turtles, Voigts keeps four large crocodiles in his heated winter garden and some more baby crocs in his sitting room and conservatory.

His favourite crocodile is 40 years old. He used to roam freely across the grass like the rabbits do now, but Voigts’ girlfriend gifted him a fence to put around the pond as she was getting nervous while hanging out the washing.

Voigts is popular in the village, where a sales assistant at the local supermarket says “Crocodile-Heini” is a treasure to the community.

Keeping crocodiles is not illegal in Brandenburg, although elsewhere in Germany, it’s a different story. In the states of Berlin, Hesse and Thuringia, individuals are explicitly forbidden from keeping dangerous animals. In Bavaria there are strong laws governing their upkeep.

And according to the German Society for Animal Protection (Deutsche Tierschutzbund), in many other states, individuals seeking to keep dangerous animals must be granted a special exemption.

But in other states, like Brandenburg there are next to no guidelines.

“The rules at state level are not just ambiguous, they are completely confusing,” says Marius Tünte of the German Society for Animal Protection.

“In Brandenburg you can do you what you want – almost,” says Voigt.

Frank Plücken of the Brandenburg Environment Office says that owners of exotic pets in Brandenburg have to fulfil three criteria. They must undertake measures to protect the species, possess relevant expertise and provide suitable enclosure to prevent escape. In addition, they must register their animals.

There are no official figures for the number of crocodiles in Germany. Voigt estimates that there are around 500 keepers of 1,000 crocodiles, as well as bogus breeders who keep their undocumented pets in their bathtubs.