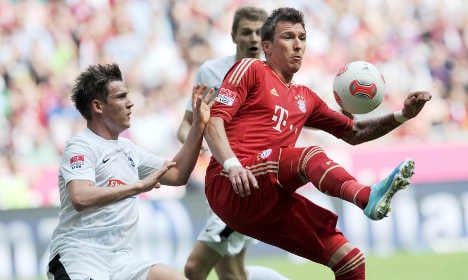 The Belgian played in Saturday’s 1-0 Bundesliga win over Freiburg as coach Jupp Heynckes made 10 changes from Tuesday’s victory when Thomas Müller netted twice as Barca suffered their heaviest European defeat since 1997.

Bayern are bidding to reach their third European final in four years at London’s Wembley stadium on May 25 and picked up their 14th straight league win of the year so far.

“We all share one goal, we want to win trophies. We’re marching onwards together. We have a strong bench and there’s no resentment,” said the

35-year-old, who is competing with Jerome Boateng for a starting place at Barcelona.

Swiss winger Xherdan Shaqiri hit the winner when he fired in a direct free-kick on 35 minutes to give Bayern, who were confirmed as champions three weeks ago, their 27th win from their 31 league games this season.

With 84 points this season, they passed Borussia Dortmund’s previous record of 81, set in May 2012, for the most Bundesliga points collected in a season,

but were made to work by a dogged Freiburg side.

It was also Heynckes’s 50th Bundesliga victory since taking charge at Bayern in July 2011 with his team bidding to become the first German team to win the treble of European, league and cup titles.

“I issued a warning to my team before we played Freiburg,” said Heynckes.

“What (coach Christian] Streich has achieved in Freiburg is sensational.

“It was hard work today but credit to the lads. We were very smart and very

Borussia Dortmund warmed up for their trip to Real Madrid in Tuesday’s other Champions League semi-final by also making 10 changes from the team which won last Wednesday’s first-leg when Robert Lewandowski scored four goals.

Transfer speculation is rife around the 24-year-old Poland star who has been heavily linked to Bayern Munich and Manchester United this week having said he will not renew his contract which expires in June 2014.

Lewandowski coming off the bench for the last 20 minutes and failing to add to his club record run having scored in his 12 previous Bundesliga matches.

metres, which coach Jurgen Klopp described as ‘world-class’, before Poland

captain Jakub Blaszczykowski scored in the 70th minute, 60 seconds after

stunning save in added time to push Martin Latka’s shot onto the post.

“I am very happy with the game, even if the initial phase didn’t please me so much,” said Klopp with his side second in the Bundesliga.

“It looked a bit too casual, even though the team were concentrated.

“From the tenth minute, we got into the game and Nuri scored a world-class

“We established ourselves in the second half and had some good chances, then they came back at us in the last ten minutes, which isn’t unusual.

“The young players who came in did really well, I have to emphasize that, it wasn’t easy for them out there.”

“If we had conceded an equaliser at the end, that would not have been