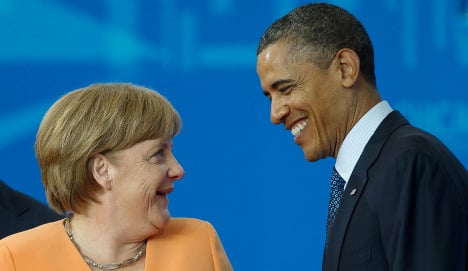 Photo: "Thanks for the putters, Angie!"

Details released by the US government showed official German gifts to President Barack Obama were relatively inexpensive, and very down to earth when compared with more glamorous presents from other state leaders.

Chancellor Angela Merkel presented Obama with a set of golf putters and a book on putting philosophy valued at $1,400 in 2011, according to information released by the US State Department.

Whether Obama spends so much time on the putting green that his wife Michelle has to console herself with a read and a drink is not known – but Merkel gave the First Lady a book on Berlin art and architecture – and six bottles of German wine. The package for a long evening in was valued at $1,400.

The kids did not go empty-handed either – Merkel gave Sasha and Malia a bag of Adidas branded goodies including swimming goggles, footballs, T-shirts, books, jackets, towels and bags, worth a total of $557.

A German government spokesman told The Local, “The presents are paid for by the state as they are given on the behalf of the federal republic, not personally by Dr Merkel. I’m sure she casts an eye over what is chosen.”

Merkel also presented the then Secretary of State Hillary Clinton with a box of 68 classical music CDs, and four DVDs, as well as a framed newspaper article about Clinton’s visit to Germany. That haul was valued at $914.

Former French President Nicolas Sarkozy was far more flashy, lavishing the US First Family with $41,000 worth of luxury designer goods during the year, including a Hermes golf bag – useful for those putters from Merkel.

Lacoste shirts, Louis Vuitton bags, Dupont pens were also among the presents given by Sarkozy, while his wife Carla Bruni-Sarkozy gave Michelle Obama some crystal lamps as well as clothes and cosmetics to the girls.

British Prime Minister David Cameron settled for a more modest tapestry worth $1,400 for the First Couple and a couple of silver bracelets for their daughters – as well as a Union Flag chew toy for the dog.

Queen Elizabeth gave Obama a red leather bound selection of papers from the Royal Archives dated 1834-1897 – a period which encompassed the American Civil War. The Queen also gave six signed photographs of herself and Prince Phillip supposedly worth thousands of dollars each, to members of the White House staff.