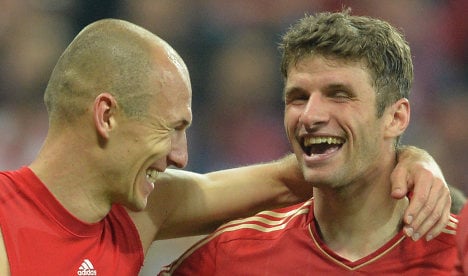 Robben (left) and Müller, both on Bayern's bench. Photo: DPA

With Bayern having long been confirmed as league champions and Dortmund eight points clear of the chasing pack in second, both teams can be forgiven for being preoccupied by their forthcoming return trips to Spain.

Bayern romped to a 4-0 win over Barcelona at Munich’s Allianz Arena on Tuesday and goal scorers Thomas Müller, who netted twice, Mario Gomez and Arjen Robben can all expect to sit out the home match against Freiburg.

Despite their 20-point lead in the league and seven Bundesliga records broken, captain Philipp Lahm has said Bayern were eager for a few more.

“We want to crack one or two more records, we don’t want to let up,” said Lahm, ahead of Wednesday’s Champions League semi-final, second-leg at Barcelona.

Bayern heads for another record

Bayern need just one more point to claim the record for the most points in a league season, as their current tally of 81 points matches Dortmund’s record haul from last season.

With four games left, Bayern are 12 short of beating their own record of 101 for the most goals in a season, set in 1972.

Having conceded only 14 goals all season, they are also on course to break their own Bundesliga record of 21, from 2007/08, for the fewest goals conceded in a campaign.

Freiburg, fifth in the league, are looking to bounce back from back-to-back defeats to VfB Stuttgart in the German Cup, then the league, and need points to keep their dreams of a European place alive.

But coach Christian Streich admitted they would have their work cut out with Bayern having scored 20 goals in their last four games.

“They will get one or two scoring chances for sure,” said the Freiburg boss.

“We go into the game with 0-0 scoreline.

“Normally, you can expect between five to eight goals; nevertheless, we’re not going to be depressed about it, it’s good to be in the same league as Bayern.”

Dortmund are at strugglers Fortuna Düsseldorf on Saturday night with right-back Lukasz Piszczek out of the game and uncertain to be fit for Tuesday’s return match in Madrid with a groin injury.

“He will definitely miss the Düsseldorf game and it will be tight for the Real match,” said Dortmund coach Jürgen Klopp, whose team heads to Madrid for Tuesday’s Champions League return match.

“We will definitely think about making one or two changes.

“I don’t know how many there will be, it will depend on how the players feel.”

Götze set to defect to Bayern

Dortmund fans had to stomach some bad news on Tuesday when it was announced that 20-year-old midfield star Mario Götze would join rivals Bayern on July 1 having activated a release clause in his contract.

Borussia are facing a fight to keep the key components of their squad together as Lewandowski’s agent has said the Poland star was set to leave Dortmund at season’s end, despite having a year left on his contract.

There is an intriguing race for fourth place, which carries a Champions League place, with four teams, Hamburg, Freiburg, Frankfurt and Borussia Mönchengladbach, all within two points of current occupants Schalke 04.

Frankfurt are at mid-table Mainz on Sunday, while ‘Gladbach travel to Wolfsburg on Saturday.