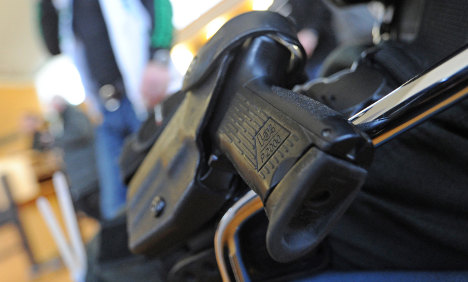 Detectives are examining video images of a scooter rider who used the facilities after the forgetful officer, but say there is no evidence that he took the loaded pistol as camera coverage does not extend to the toilet.

The officer used the toilet at the service station in the Niederschöneweide area of the German capital at around 8pm on Wednesday, but left his gun behind. The Sigsauer P6 nine-millimetre gun was loaded with eight bullets, the Tagesspiegel newspaper reported on Thursday.

The policeman realized he was unarmed half an hour after he and his colleague had left, and by the time they returned to the services it had gone.

His only hope would seem to lie on a video which shows a scooter rider getting the key for the toilet.

“But we do not know whether he took the weapon with him as there is no video camera installed in the toilet,” a police spokesman said.

One officer told the paper that colleagues often remove their pistols when using the toilet to stop them pulling an undone pair of trousers onto the floor.

“In some toilets the floor is not really clean. If one does not want the weapon on the belt, which is pretty heavy, to pull the trousers downwards, one takes it out beforehand,” he said.