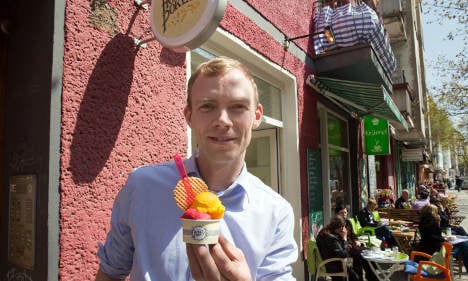 As warm weather arrived in the capital, so did hordes of hungry ice-cream fans outside one popular vendor in the gentrified Prenzlauer Berg district, wrote Frankfurter Allgemeine Zeitung on Tuesday.

Since opening two years ago, the tiny “Hokey Pokey” shop on Stargarder Strasse has rocketed from insider tip to full-blown hipster hangout. So when 32-year-old Niko Robert reopened his doors in March after the winter break, excitement ensued.

Hankering after scoops of Indian Mango, Rocky Road and Pistachio, customers line the pavement; bikes, pushchairs and scooters in tow, blocking pedestrians and traffic, and stifling custom to neighbouring businesses, said the paper.

At peak times, the line has been known to snake 50 metres down the road. And once armed with a cone, customers tend to plop down next to the shop to eat, crowding nearby benches and tables.

Now, in the latest gentrification debate to hit the area, the proprietor of an Italian café a few doors down has had enough. Robert said she has entered into several arguments with his customers, has been known to swear at him in the street threatened to report him to the police.

The café owner, who has not spoken to press, presumably feels the crowds of ice-cream customers drive away her custom, block access and ruin the view from the tables she has set out on the street.

“He’s a nice guy, I love his ice-cream,” Abdel Muhdi, owner of nearby falafel takeout restaurant “1001 Falafel” told the paper. “The ice-cream shop is doing great business, but right and left of it you can’t work anymore.”

Now Robert, scared of being shut down by the local Ordnungsamt, has resorted to trying to drive away his customers. First, he shut up shop for three days over last weekend. Then big signs appeared announcing price rises – up from €1.20 to €1.60 a scoop, wrote the paper.

Robert says he really just wants to keep his shop open and bring custom down to acceptable levels. “The aim is not to make as much money as possible here,” said Robert, pointing out that his expensive ingredients mean high overheads.