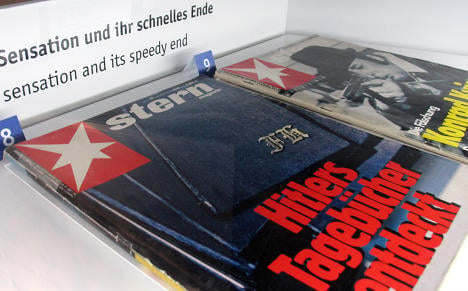 Stern unveiled on April 25th, 1983 excerpts from more than 60 notebooks purportedly written by the Nazi leader in a supposed world exclusive, but a few days later the diaries were found to be forgeries.

“The forged diaries are a part of the history of Stern. We don’t want to get rid of them but deal with them appropriately and, above all, objectively,” Stern chief editor Dominik Wichmann said in a written statement.

It was the federal archive in Koblenz in western Germany as well as federal criminal police who had detected the forgery three decades ago, according to Stern.

The incident became one of the biggest German post-war media scandals.

Stern reporter Gerd Heidemann presented 62 notebooks supposedly written by Hitler between 1932 and 1945, for which the magazine had paid 9.3 million deutschmarks (around €4.7 million today).

But they turned out to have been the work of forger Konrad Kujau, and he and Heidemann were prosecuted and sentenced to around four years in prison each for the fraud.

“We’re rendering all the diaries that are still in the safekeeping of the publishing company,” said Stern spokeswoman Franziska Kipper.

Other parts of the forged diaries held by other institutions, such as the Cartier Foundation in Paris or the House of History in Bonn, will stay where they are and are unaffected by Stern’s decision, she said.

The magazine wants to respect a 30-year deadline after which state documents normally become accessible for public scrutiny, it said.

“The forged Hitler diaries are documents of contemporary history. They are safest in the federal archive,” the archive’s head Michael Hollmann was quoted as saying in the Stern statement.