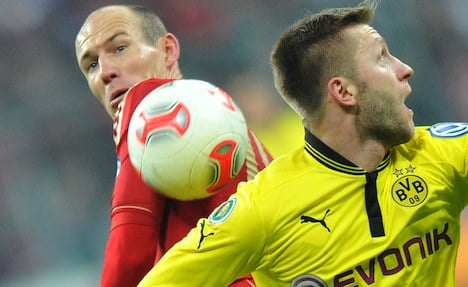 Bayern host Barcelona in Tuesday’s semi-final first-leg having cruised to the Bundesliga title with alarming ease and a massive 20-point lead, while second-placed Dortmund, who have won the last two league titles, host Real Madrid on Wednesday in the last four.

Ironically, some are saying the Bundesliga could now suffer from a “Spanish situation,” similar to how Real and Barca are a class apart from the rest of La Liga.

Bavarian giants Bayern have won 22 of the 50 Bundesliga titles since the competition started, but this season has been extraordinary even by their lofty standards.

Having won 6-1 at Hannover 96 on Saturday to earn a record ninth away league win, Bayern have posted recent hefty wins, including a 9-2 pounding of Hamburg

and a 6-1 trouncing of Werder Bremen, both traditionally strong clubs.

Dortmund are one of only four teams to have avoided losing to Bayern in the league as Munich have claimed a record 26 wins from 30 games with four matches still to go this season.

Bayern president Uli Hoeneß has voiced concerns of the Bundesliga following the Spanish league, where either Barcelona or Real Madrid have shared the title every year since Valencia’s win in the 2003/04 season.

“There’s a big difference in performance levels in the German league,” Hoeneß told magazine Kicker, having also discussed the matter with Dortmund’s CEO Hans-Joachim Watzke. “I find the idea of two or three teams pulling away not good. We can’t be comfortable with that.”

Hoeneß has said the Bundesliga clubs must act to make sure the revenue from television money is distributed fairly amongst the 18 teams to ensure every club has a fair chance of competing for the title.

Christian Seifert, CEO of the German Football League (DFL) has ruled out any immediate change to the cash distribution, which currently sees Bayern and Dortmund take the top amounts of €5.8 million and €5.6 million respectively of the €100 million available from television rights and sponsorship.

“The distribution has been decided for the next four seasons and was voted by all the league clubs unanimously,” Seifert told Kicker. “The DFL has not received a signal that this should change. Even if both of the top clubs waived their share, or even doubled it, the other 16 clubs wouldn’t exactly take a giant step forward.”

Dortmund’s Watzke, whose club came back from the brink of bankruptcy in 2005 to win the last two Bundesliga titles, has said there must be research before any financial changes are made.

“You have to find out if there is a need to make a change,” said the Borussia CEO. “My gut tells me though that things aren’t as in order as they seem.”

Dortmund coach Jürgen Klopp compared this season’s Bundesliga title-race to the Scottish league where Celtic are now dominant after the demise of Glasgow neighbours Rangers.

“Unfortunately, no, I fear more a ‘Scottish situation'”, said Klopp, who led Dortmund to the league and cup double last season.

“It is nice that we have climbed on board to challenge Bayern, but at the end of the day we just have to hope we can get a slice of the pie.”

Dortmund’s bitter rivals Schalke also said it was up to the league’s other clubs to offer Bayern some competition.

“That has always been so and will remain so, even if there is another German champion now and then. Behind them everything is open.”