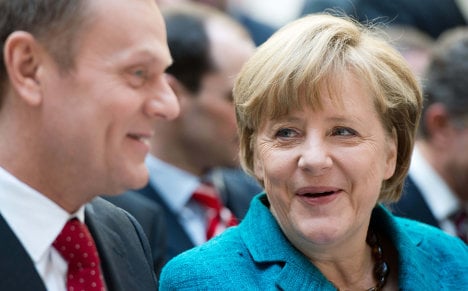 Merkel said Germany always sought to make joint decisions in coordination with France and the other members of the 27-nation bloc.

“Germany has a … sometimes complicated role because we are the largest economy – we are not the richest, but we are the largest,” Merkel said at a book launch and panel talk with Polish Prime Minister Donald Tusk. “Therefore Germany will only act together with the others – hegemony is totally foreign to me.”

Merkel said the EU tended to find solutions “when we are looking into the abyss” but also needed to work toward greater unity in calmer times. She said members should be willing to give up some national sovereignty and accept that “Europe has the last word in some areas”.

Merkel said Europe needed even closer cooperation to succeed amid tough global competition and to avoid decline, pointing to her personal experience growing up in the former communist East Germany.

“Look, I’ve experienced the collapse of a country, the GDR,” she said, referring to the communist German Democratic Republic. “The economic system failed under the aegis of the Soviet Union. What I really don’t want is to look on, eyes open, as Europe as a whole slips back. I would find that absurd, we have all the skills in our hands.”

Angry protesters on the streets of debt-mired eurozone countries such as Greece, Cyprus and Portugal argue that Merkel is imposing austerity-driven prescriptions against the crisis that are choking off economic growth and killing jobs.

In the austerity-versus-economic-stimulus debate, Merkel said “growth has become a mirage. Growth doesn’t come from saving – and I don’t favour an approach of only saving – but growth is created from structural reforms. That is also Germany’s experience.”

Tusk, speaking through an interpreter, praised what he saw as Merkel’s non ideological and pragmatic style and backed the goal of a strong EU, saying that “responsibility, solidarity and leadership means opportunity for Europe.”