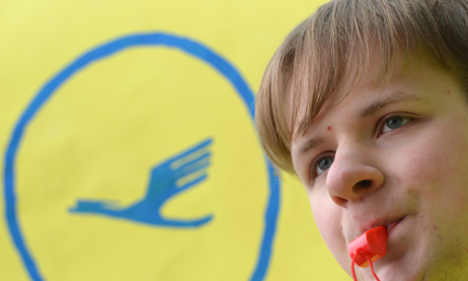 “We’ll be putting all our available transport on the tracks,” a spokeswoman for Deutsche Bahn said Sunday. The company is hiring extra workers to serve stations in major cities and has advised passengers to book seats in advance.

German flag carrier Lufthansa said that most of its domestic, European and long haul flights would be cancelled on Monday due to strike action by ground personnel and cabin crews.

“Due to strike action announced for April 22, nearly all Lufthansa flights to German and European destinations must be cancelled,” the airline announced in a statement on Saturday.

The firm said it had scheduled only around 20 of its usual 1,650 short-haul flights for Monday and warned long-haul routes would also be seriously affected.

At Frankfurt Airport, Europe’s third-busiest hub, 46 out of 50 intercontinental flights would be scrapped, with long-haul flights from Munich also grounded.

Verdi is demanding a 5.2 percent pay increase for 33,000 Lufthansa ground staff, plus employees of various subsidiaries as well as cabin crew members who are Verdi members.

The escalating pay dispute threatens to cause transport chaos across Europe’s top economy and comes a month after Lufthansa was forced to cancel nearly 700 out of a total 1,800 flights due to half a day of limited strikes.

Lufthansa board member Stefan Lauer, said the action, described as a 24-hour warning strike, was “de facto an all-out strike” that was “a completely excessive measure that can in no way be justified in view of the current state of negotiations.”

Verdi has accused management of “playing with employees’ fears about their future and their jobs” in refusing to make any concrete guarantees.

The union has complained that the offer tabled by management represented an increase of 0.4-0.6 percent over a period of 12 months.