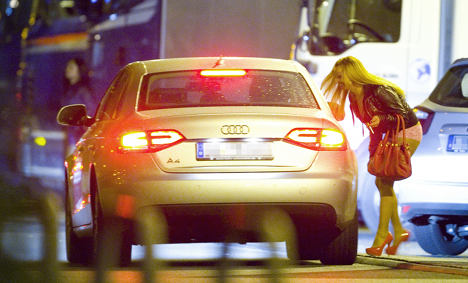 The Greens were a leading force decriminalizing the world’s oldest profession over a decade ago, but recent changes in the sex work world are pushing them to call for new rules, Süddeutsche Zeitung reported on Thursday.

At a conference later this month, the party will put forward a raft of changes in its election platform – including making punters prove they are disease-free before having sex with a prostitute. This idea is being championed by leaders of the Greens in Baden-Württemberg and Bavaria, Thekla Walker and Dieter Janecek.

Walker told the paper that low-cost prostitution had boomed in Germany, fuelled by Eastern European countries like Bulgaria and Romania joining the European Union. Some 80 percent of sex workers in Germany are thought to be foreigners, and paying for sex has become less of a taboo in recent years.

Part of the idea was legalizing prostitution would make it easier for police to control the criminal aspect of the scene and improve working conditions. This has, the paper said, failed to happen.

Introducing tighter laws would protect people working in the field, Walker said. “The fact is that often sex workers are forced into it,” she told the paper.

Cracking down on prostitution brings the Greens more in line with Chancellor Angela Merkel’s conservative Christian Democrats, who also thinks that prostitutes should have to register their profession, condoms should be obligatory and that there should be a minimum age of 21.

The main difference between the two parties is though, that the conservatives were never in favour of legalizing it in the first place.

There are of course, critics of the Green’s plan. Criminologist Monika Frommel told the Süddeutsche Zeitung that stricter sanctions would have no effect, especially if it is being used as part of efforts to controlling human trafficking – something the EU is currently trying to control.

In 2011, the central EU government agreed that each country should introduce laws cracking down on people trafficking by April this year. Germany was one of 22 of 27 member states that is yet to have made any changes.