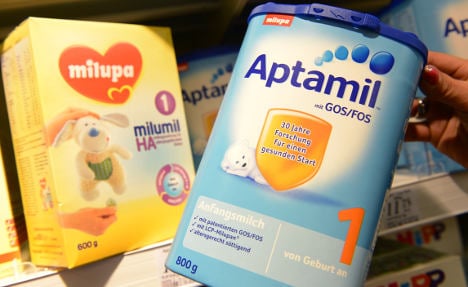 Empty gaps are appearing on supermarket shelves all over the country as manufacturers struggle with German parents panic-buying powdered baby milk, wrote Die Welt on Thursday.

German market leader Milupa has been badly hit by the sudden, unexpected rise in demand, spokesman Stefan Stohl told the paper. Since the end of last year demand is up 30 percent for Milupa’s Aptamil milk powder alone.

And as stocks of baby milk formula diminish across Germany, some areas have even seen panic-buying and hoarding by anxious parents. In some supermarkets, parents are being limited to one or two packets at a time, wrote the paper.

“Especially affected are areas where many families with small children live,” Sina Balkau, spokeswoman for the drugstore chain Rossmann, told the paper.

Milupa has apologized for the supply problems in a letter to parents on its website. The company’s factory in Fulda in central Germany is at full capacity, running 24 hours a day, seven days a week. But Stohl said deliveries of ingredients are just not arriving fast enough to meet demand.

Blame for the supply gap, which has also hit the United States, Australia, New Zealand and Holland has been placed squarely on China.

A series of recent scandals involving Chinese-made contaminated baby milk have prompted Chinese parents to buy powdered baby milk from abroad, either in person or through online portals, wrote the paper.

Yet Milupa told the paper it has no plans to officially export baby milk to China from Germany. The company has a branch there, but anxious Chinese parents avoid buying from them because the powder is not seen as having been made in Germany and so is not trusted.