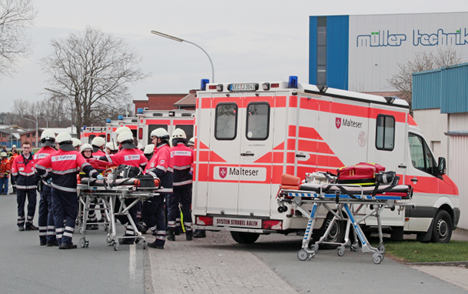 No one who consumed the rolls – which were covered in unusual red pellets – is currently in a critical condition, but all are in hospital as experts are unsure how long the rat poison will take before it kicks in.

Staff were pleasantly surprised when they found the box containing the poisoned food outside the front door of their plastics business in Steinfeld bei Oldenburg, Lower Saxony on Tuesday morning – presuming it was a gift.

It was not until later that morning that the workers began to think twice about the rolls, realising that they probably should not have eaten them. They rang the emergency services who sent 150 staff down to the scene.

A helicopter arrived to fly the remaining bread to a specialist laboratory in Berlin for testing. On Wednesday it emerged that the strange substance on the rolls was rat poison. What is unclear is just how dangerous it is to humans.

Police said that they were still checking that there were not any other members of staff that had eaten the rolls and were not in hospital.