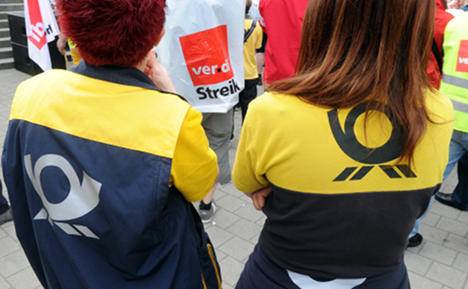 The country’s biggest workers’ union Verdi called Deutsche Post employees to strike as they pushed for a six percent pay rise – or at least €140 more per month for standard posties and €65 more for trainees.

Wednesday’s strike includes mostly only letter carriers but future strikes could include more of the Deutsche Post’s 132,000 employees.

In North Rhine-Westphalia alone, around 600 posties did not come to work, leaving at least one million letters and packets undelivered, a spokesman from the state’s post office confirmed.

In Berlin and Baden-Württemberg, 500 failed to show up while the 300 missing letter carriers in the central state of Hesse meant 600,000 missives were not delivered.

Verdi called workers in 17 states and towns to strike and in bigger cities like Berlin, Hamburg, Cologne and Hannover, there could be demonstrations throughout the day, a Verdi spokesman confirmed.