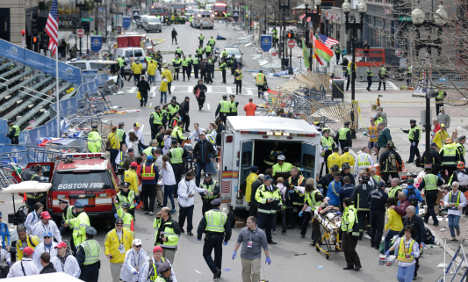 At least three people died and more than a hundred were injured in an apparent terrorist attack in the northeastern US city, according to media reports.

“My condolences to the survivors of those who have lost their lives in this despicable deed,” Merkel said in a statement. “I hope those responsible will soon be brought to justice.”

“We offer our sympathies to families and friends of the victims, and we hope the many injured will soon recover,” Westerwelle said, calling the incident a “tragedy.”

Germany’s embassy in America early on Tuesday did not yet have information on whether any of the country’s citizens had been hurt in the bombing. With nearly 250 German runners registered, the nation had one of the largest contingents of participants.

“Unbelievable. Can’t believe it. I’m totally shocked,” said Sabrina Mockenhaupt, who was in her hotel 200 metres away when the blasts occurred.

“As I came back to hotel lobby, everything was suddenly different. I saw only the injured, the police and helpers,” she told the Westdeutsche Allgemeine Zeitung newspaper.