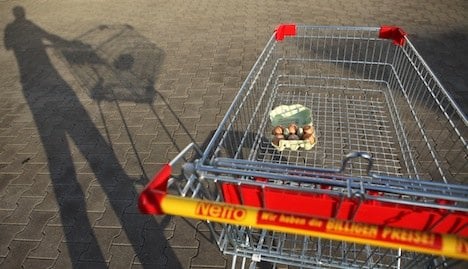 The 33-year-old desperately wanted to buy some spongey biscuits at a supermarket in the Ruhr Valley city of Hagen while her husband waited out front in the car, the Westdeutsche Allgemeine Zeitung (WAZ) newspaper reported on Tuesday.

After a 40-year-old fellow customer refused to let her go ahead in the checkout queue, she stormed over to the information desk to make her purchase. Unable to buy them there, she left the cakes in a huff and stormed to the exit.

Spotting the other woman leaving the store, the frustrated biscuit buyer rammed her shopping trolley into her heels, severely injuring her. She then jumped into the boot of her hubby’s car and attempted to cover the licence plate with her hands as they sped from the parking lot.

But the police rang the couple’s doorbell shortly thereafter and questioned the violent shopper. Her excuse for the supermarket rampage? “I lost control of my shopping cart, it’s not like they have anti-lock brakes,” she told the officers, according to the WAZ.

The other woman was so seriously injured by the trolley assault, she was taken to a nearby hospital in an ambulance. The biscuit bully is now being investigated for premeditated assault.