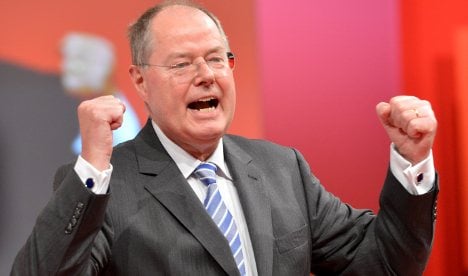 “We still have 161 days to mobilise the voters. So to battle!” Peer Steinbrück told 600 members of his centre-left Social Democrats (SPD) at a party congress in the southern Bavarian city of Augsburg.

Five months ahead of general elections, his speech – an attempt to fix a limping bid to become the leader of Europe’s biggest economy – was met with a standing ovation of several minutes.

But it remained to be seen how Steinbrück would manage to make up the big gap polls point to between his party and Merkel’s conservatives.

Merkel is riding high in personal approval ratings in guiding Germany relatively unscathed through the euro crisis, although not everyone is happy – a new eurosceptic party was also established in Berlin on Sunday.

Steinbrück, 66, shrugged off the most recent survey in Sunday’s Bild newspaper showing that a mere one in four Germans support the SPD, compared to 41 percent backing for Merkel’s Christian Democrats and their Bavarian sister party, the Christian Social Union.

And he urged the SPD and the ecologist Green party, with whom the SPD governed in coalition from 1998 to 2005, “to do better” than Merkel’s government.

Promised measures included a higher minimum wage of €8.50 per hour and higher taxes for the rich.

In an unusual move, the Greens’ veteran figure Claudia Roth, also addressed the SPD event, beating the campaign drum for what is called a “red-green” coalition in Germany’s colour-coded politics.

Steinbrück, who served as Merkel’s finance minister in a 2005-2009 “grand coalition” government, had a gaffe-prone start to his campaign.

First there was controversy late last year when the SPD leader, meant to be the hope of blue-collar Germany, was revealed to have accepted high speaking fees worth more than one million euros in total.

Then he blundered by saying the chancellor’s salary was too low and ruffled feathers abroad when he labelled Italy’s former premier Silvio Berlusconi and comic-turned-politician Beppe Grillo as two “clowns”.

About 300 miles (500 kilometres) from Augsburg, the new Alternative for Germany party, which is pushing for a return to the Deutschmark, held its founding congress in a five-star hotel in the German capital.

Since February it has gathered 7,500 members and donors, united in their anger and disappointment over the EU’s development and a feeling that Germany is repeatedly having to stump up to rescue its debt-ridden eurozone partners.

“We want Europe but not the one currently in place,” he added.

However almost 70 percent of Germans now favour the euro, and only 27 percent would prefer to ditch the common currency and return to the once-beloved Deutschmark, a survey published this week found.

Germany’s image, which has taken a battering abroad lately over Merkel’s championing of budgetary rigour in combating the euro crisis, also worries some members of the newly-established party.

“I fear that everything we’ve established in the post-war decades in this field is reduced to nothing,” Hans Liesegang, 64, a former soldier said.