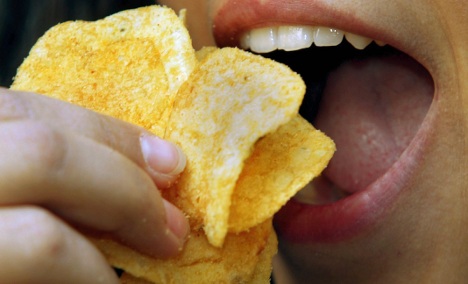 German scientists from the University of Erlangen-Nuremberg are searching for that crunch magic ingredient in crisps which make them so irresistible.

Dr Tobias Hoch and his team want to find what makes people carry on eating after they are full, he told a meeting of the American Chemical Society in New Orleans last week.

Hoch said that it was not only fat and carbohydrate that made snacks like crisps so addictive, but that some mystery ingredient activated the brain’s pleasure and reward centres.

“The effect of potato chips on brain activity, as well as feeding behaviour, can only partially be explained by its fat and carbohydrate content,” Hoch told the society. “There must be something else in the chips that make them so desirable.”

In studies, the scientists found that rats’ reward and addiction centres in the brain went into overdrive when they ate crisps, but were hardly activated by foods with an equivalent fat and carbohydrate content.

While the rats didn’t eat more crisps than the fat and carbohydrate mix they were offered, Hoch said they more actively pursued the crisps, suggesting some ingredient in the potato snack was sparking more interest.

“Recreational over-eating may occur in almost everyone at some time in life,” said Hoch, who is looking to develop an anti-obesity drug once he has isolated the mystery molecule.

If the team can identify the molecular triggers in snacks which stimulate pleasure and reward centres in the brain, they could also block them – possibly preventing people gorging on high calorie snacks on a full stomach.