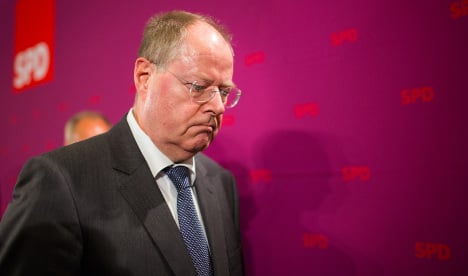 With less than half a year to go until elections, Social Democratic Party (SPD) standard-bearer Peer Steinbrück will try to rally the troops at a party meeting with 700 delegates in the Bavarian city of Augsburg.

Steinbrück, who served as Merkel’s finance minister in a 2005-09 “grand coalition” government, has had an awful start in his campaign to take her job come the September 22 general election.

There was controversy late last year over high speaking fees, worth more than €1 million that the supposed political hope of blue-collar Germany had accepted on the lecture circuit.

In another misstep, he said the chancellor’s salary was too low, comparing it to that of a regional bank manager — comments that, at worst, made him seem money obsessed and, at best, raised questions about his political judgment.

“The problem is the SPD’s chancellor candidate,” said political scientist Jens Walther of the University of Düsseldorf, voicing a widely held view even inside Germany’s oldest political party.

Steinbrück has defended his edgy straight-talk, contrasting it with the usual “pebble-smooth” chatter of the political class — possibly a jab at Merkel, who tends to seek consensus before coming down hard on an issue.

For now, though, most German voters feel safer in the hands of the chancellor, sometimes dubbed Mutti (mum), for her steady hand in guiding the nation relatively unscathed through the storms of the eurozone crisis.

majority over their centre-left rivals.

While Merkel is riding high in personal approval ratings, and her party scored 41 percent in the poll, the SPD polled only 23 percent, near an all-time low for the party that turns 150 years old this year.

While Merkel’s conservative Christian Democrats are allied with the pro-business Free Democrats, the SPD wants to govern with the Green party, former anti-nuclear peaceniks who have long become a mainstream force.

At Sunday’s party event, a guest speaker will be the Greens’ veteran figure Claudia Roth, beating the campaign drum for what is called a “red-green”

The SPD will campaign on a social justice platform under the slogan “towards a new social balance in our country”, demanding, for example, a minimum wage of €8.50 per hour and higher taxes for the rich.

“These are concrete topics of current concern to voters where the Social Democrats can win points,” said Walther, the political scientist.

But Steinbrück, from the party’s right wing, and the SPD may struggle to sell the social justice message.

It was their party that, under former chancellor Gerhard Schroeder in a coalition with the Greens, pushed through tough labour market reforms that have been credited variously with reviving the economy and hurting the most vulnerable.

Last week’s poll also gave Merkel, a pastor’s daughter raised in the former East Germany, a towering lead in personal support over her tough-talking rival from the northern port city of Hamburg.

While 60 percent supported her in the role of chancellor of Europe’s biggest economic power, only 25 percent trusted Steinbrueck with the job.

But some people do not trust either of them. Also on Sunday, the small new eurosceptic party, Alternative for Germany, will hold its founding congress, pushing for a return to the Deutschmark.