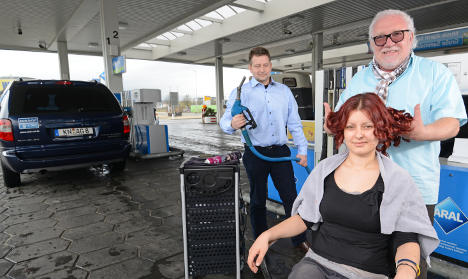 Ralf Mehlmann opened his first “Tank & Cut” in Constance, the idea being that the customer can fill up his or her tank, get the car washed, get something to eat – and also get a hair cut.

Ten additional locations should open this year and 100 in 2014.

“I never had time to go to the hair salon,” he said. “But anyone with a car has to go to the petrol station. Why not combine the two?”

The Professional Association of Hairdressers and Cosmetics remains unconvinced. While association director Matthias Moser is certainly willing to give the concept a chance to work, he thinks the idea too complicated.

“I get petrol, maybe buy a few gummy bears and then go to my hairdresser” – such a widespread service offering doesn’t really fit into what salons do.

Moser doesn’t think this concept will appeal to a new group of consumers, as shops that offer a quick haircut are already on the market.

The association is also worried about price pressures from such a business. Small hair salons are already under pressure from cheap chains, he said.

The Federal Association of Petrol Stations and Commercial Car Washes is also skeptical. “You have to try something new, but whether the customer will accept this remains to be seen,” said association chief Sigrid Pook.