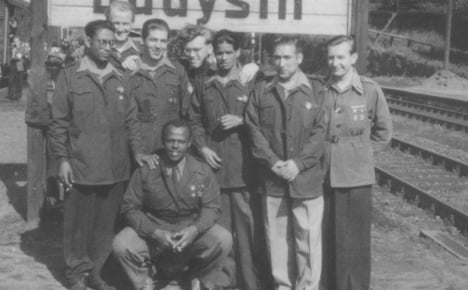 An archive picture of Charles Lucas and deserters in Bautzen. Photo: Peter Köpf

An iconic photo of East German conscript Conrad Schumann jumping over barbed wire as the Berlin Wall was being built in 1961 came to symbolize the flight for freedom of many trapped behind the Iron Curtain.

The idea that NATO soldiers would flee from the democratic West to the communist East is almost unthinkable, but a new book tells the story of those who ran the “wrong” way.

German author Peter Köpf stumbled upon the subject while researching the experiences of black American soldiers based in Germany. Some left for East Germany out of communist conviction, out of opposition to the Korean War, others to escape the racism at home – and at least one, in order to marry the woman he loved.

“This corrects to some extent our picture of history, namely: soldiers from the East escaping to the West,” Köpf recently told The Local.

His book “Where is Lieutenant Adkins? The fate of NATO Deserters in the GDR” traces the steps of western soldiers who crossed the ideological barrier in the 1950s and made their lives in the communist German Democratic Republic (GDR).

Köpf – editor of the English-language monthly “The German Times” – was researching black US soldiers in Germany when he found an interview in an East German newspaper with “Karl Lukas,” an American soldier who had fled to the GDR.

“I wondered how I could find out more about him,” he said. “I went to the Stasi archives authority and placed a request for access to his records. Two weeks later I had a 220-page file on Charles Lucas in my hands.”

Lucas – at 36 one of the oldest deserters – fled the US Army to marry a girl he had met in Cologne, which he claimed had been forbidden by his superiors.

“There was a two-class order in the US Army. Black soldiers had no say, as was the case in many American cities at the time,” Köpf said.

The pair escaped to the GDR, but the relationship soon fell apart and she returned to the West. Lucas stayed and became something of a celebrity in his adopted homeland.

As time passed he began to feel homesick, but knew he’d be arrested and convicted of desertion if he returned. In 1956, with no way out, he tragically committed suicide.

This celebrity which deserters in the GDR were granted was a result of the propaganda value they afforded the government.

“In the 50s and 60s a battle of ideologies raged: communism or capitalism, which is the better system? So if a NATO deserter declared that life is better in the East this carried enormous political significance,” Köpf said.

But they were also closely watched by the East German secret police, the Stasi, which kept detailed files on every single one.

After a tough interrogation process called “filtration,” all Western deserters were sent to the “House of International Solidarity,” a facility in Bautzen near the Polish border where they were taught German and the basics of Marxist-Leninist theory.

Those willing to cooperate were propaganda gold for the GDR, which was usually more concerned with preventing their people from fleeing to the West.

Köpf restricted himself to the time period between 1953 and 1956, and was only able to meet one of the deserters in person. While most had died of old age, others had disappeared from record.

One of those still alive is Victor Grossman (born Stephen Wechsler), a GI in the US Army who joined up at the height of the American anti-Communist Red Scare. (Click here for The Local’s interview with Victor Grossman.)

He lied about having been a member of several leftist groups before being drafted and posted to Nuremberg in 1951. Realising US investigators had uncovered his deception, he fled to East Germany where the Soviet occupiers gave him his new name.

“It was great propaganda. He was famous in the GDR, but few at that point knew he was not the only deserter. The phenomenon was not widely spoken about,” Köpf said.

In 1994, Grossman went back across the Atlantic for the first time since his desertion and received an official discharge from the US Army. The case against him had been closed, he was told. Grossman still lives in Berlin today.

The case of the man whose name inspired the book’s title is particularly intriguing. William Adkins deserted because he was apparently dedicated to the cause of socialism.

He actually wanted to start a new life in the Soviet Union, but only got as far as East Germany, where he worked as a Stasi informant under the name Jack Forster.

Adkins later enrolled on a journalism course at Leipzig University under the alias John Reed. He married and worked as a reporter for East German state radio.

Yet all traces of him disappear in 1963 – Köpf says he can only assume Adkins returned to the West with a new identity, though he doesn’t dispute he may have been an American spy all along.

Jack Stuart, another deserter, had no grandiose ideas about a new socialist world order – the 19-year-old paratrooper from Falkirk, Scotland, defected in 1949 in search of an adventure.

“Stuart was a happy-go-lucky kind of guy, an adventurer,” said Köpf.

He became an instrument of the communist propaganda machine, invited to speak at Free German Youth rallies and often finding money had been slipped into his pockets afterwards. The attention was welcomed by the young Scot, said Köpf.

But Stuart’s adventure was short-lived – broke and driven to desperate measures, he killed the wife of the man whose flat he was renting in Dresden and left with the money he could find. He was subsequently caught by East German authorities and spent the next 15 years in prison.

Of the 200 soldiers filed as deserters by 1961, around half returned to the West. A combination, Köpf said, of efforts by the US military’s counterintelligence agency, the CIC, and the effect of the constant Stasi surveillance they were subjected to.

“If they had been left alone and given decent jobs then perhaps not so many would have gone back over,” he said. “On the other hand, general conditions in the GDR were not exactly rosy. The deserters earned far more than the average East German citizen.”

But Köpf said he couldn’t find any black US soldiers who returned to the United States, where the civil rights movement was still in its infancy in the 1950s.

“They presumably lived a better life in the GDR than in the West, in the army or in the US states which they came from. There they were recognized and popular,” he said.