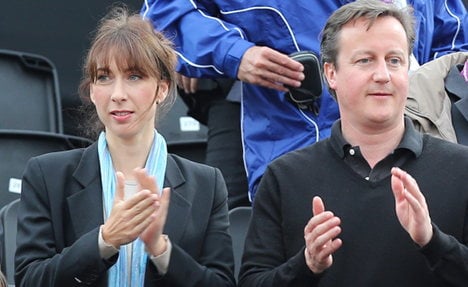 Cameron, who cut short a trip to Spain and France on Monday after the death of former premier Margaret Thatcher, will be accompanied by his wife Samantha and their three children, his Downing Street office said.

A spokesman for Merkel said the rare reception at an elegant 18th century government guest house some 80 kilometres north of Berlin was intended to underline that the visit was “perhaps not just pure routine.”

Both sides said the leaders would discuss European Union reform, as well as the forthcoming G8 summit in June hosted by Britain and the bloodshed in Syria.

“It is part of the ongoing strong, very good working relationship that the prime minister and the German chancellor have,” Cameron’s spokesman said.

Merkel’s spokesman said she, her publicity-shy husband Joachim Sauer and the Camerons would have dinner on Friday and stay at the manor house in Meseberg overnight, with the leaders to hold further talks on Saturday.

Cameron alarmed fellow EU leaders in January when he set out plans to wrest back powers from Brussels, and to then put Britain’s reshaped membership to an in-out referendum by the end of 2017.

In an interview with five European newspapers that was published on Monday, Cameron called on the EU to bring in “change that all of Europe can benefit from” including on competitiveness and spending.

But the British premier also said he believed that treaty change in the 27-member EU would be necessary in future – something that European leaders already bogged down in the eurozone crisis are keen to avoid.

However Merkel’s decision to roll out the red carpet for the Camerons underlines her view that Britain is a crucial member of the EU and must be encouraged to maintain its engagement in the bloc.

“It is a meeting linked to numerous, highly intensive, good discussions that the chancellor has had with Prime Minister Cameron,” Seibert told a regular media briefing, noting that Merkel and Sauer had been guests in 2011 at Chequers, the British prime minister’s country retreat.

“The contacts are extremely intensive, reflecting our close friendship and partnership with Britain… For us, Britain is an important and indispensable partner in Europe.”

When asked whether Merkel and Cameron would discuss calls to do more to fight tax fraud and evasion, Seibert said “Germany and Britain are pursuing similar goals in this area” and that the issue would be covered in their talks.

Downing Street said it was trying to reschedule a meeting with French President Francois Hollande that he cancelled after Thatcher’s death. Cameron also cut short a visit to Madrid on Monday that included talks with premier Mariano Rajoy.