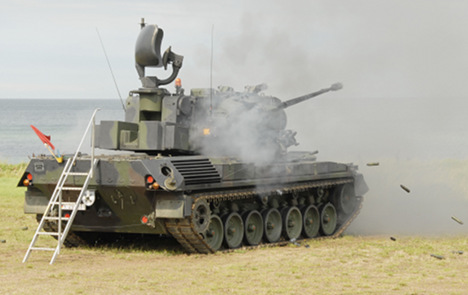 The tanks are likely to be used when Brazil hosts the World Cup next year and the 2016 Olympic Games. A Defence Ministry statement said the contract would be signed in the coming days with the total value still under negotiation.

The used, 47.5-tonne tanks, which were upgraded in 2010 and fitted with new radar systems, will be able to operate until 2030, the G1 news website quoted anti-aircraft artillery brigade chief General Marcio Roland Heise as saying.

Eight of the armoured vehicles are to be delivered before June and will be used during World Youth Day, the Catholic youth fest that Pope Francis plans to attend in Rio in July.

“I want all troops to be ready and trained to use this new (anti-aircraft) system at the opening and closing of the Confederations Cup and during the pope’s visit to protect those who will be in stadiums,” Heise said.

The other tanks are to be delivered by 2015.

Rio is hosting Latin America’s biggest defence trade fair this week. South Africa’s privately-owned Paramount Group, which is attending the LAAD Defense and Security expo, signed a contract with Rio de Janeiro state for the sale of eight police armoured vehicles that will be delivered by December.

The vehicles will also be used to protect the World Cup and the 2016 Summer Olympics.