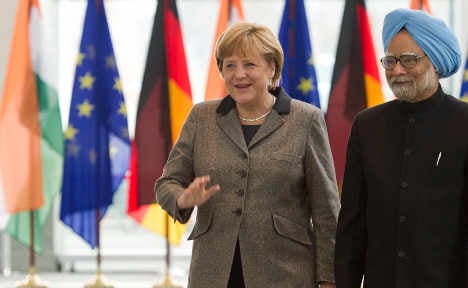 While Germany, amid the eurozone crisis, wants to broaden trade and investment links with large emerging markets, India is seeking German technology and expertise in areas such as renewable energy and education.

Singh and Merkel, who are said to have a good personal rapport, launched the so-called Indo-German intergovernmental consultations in New Delhi in May 2011, where cabinet ministers from both nations meet every two years.

Germany only has such ties with some European neighbours, China and Israel.

Singh, before leaving for Berlin, said that New Delhi intends “to seek greater trade and investment ties with Germany, as we continue to take steps to boost domestic investments, attract foreign investors and spur the economy back to its long term growth potential of 8 percent.”

Germany is “a key partner for us in areas like infrastructure, manufacturing, science and technology, higher education, vocational training and clean and renewable energy,” he added in a statement.

Both sides were expected to sign several agreements and memorandums of understanding in these areas, he said.

Singh, who was travelling with a large business delegation, was received with pomp, military honours and a dinner by Merkel on Wednesday.

German Foreign Minister Guido Westerwelle praised India, with its 1.2 billion people, as “a power centre on the rise” and an “economic success story that has shifted the weight in the world.”

“We have many partners in the world, but India is a democracy, the biggest democracy in the world,” he said, praising their “shared values.”

Westerwelle also voiced support for an EU-Indian free trade and investment pact that has been in the works since 2007 but which has been held up by disagreements on access to India’s automotive, alcoholic beverage and insurance sectors, and Indian concern about strict EU visa rules.

Indian Foreign Minister Salman Khurshid said at the meeting that the trade talks should now move from the level of technocrats to statesmen.

He thanked Germany for its support on pushing forward the negotiations, which he said “will be concluded hopefully soon”, calling the EU’s biggest economy a “constant companion, friend, strategic partner.”

The governments were also expected to discuss the conflict in Afghanistan, where German troops are deployed, Iran’s nuclear programme and joints efforts by Germany and India to seek reform of the UN Security Council.