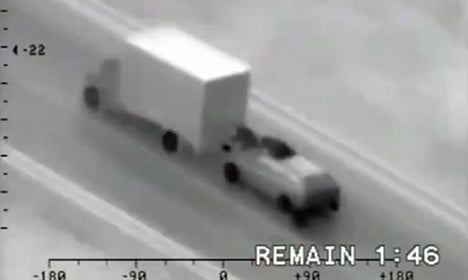 A van carrying cigarettes was on Tuesday night the latest victim of what the German police have dubbed “truck robbery”. Speeding down the A7 motorway near Hildesheim in Lower Saxony, thieves managed to climb out of the sunroof and bring down the loading flap, the website of Der Spiegel news magazine reported.

Failing to open the doors, they drove off, leaving the flap down. The driver did not notice and continued going at 80 kph for hours.

And while this case was the first reported in Lower Saxony, the western German state of North Rhine-Westphalia (NRW) is no stranger to the trend with 50 known cases since November 2012, Babara Vogelsang from the Dortmund prosecutor’s office told the magazine.

Executing a high-speed “truck robbery” happens almost always in the same way and requires three cars said Vogelsang. She explained that one car drives in front of a truck to control its speed while a second hangs behind and stops other drivers from cutting in.

A third then gets as close to the back of the truck as possible before someone climbs through the sunroof, slides over the bonnet and opens the back doors before passing back whatever they can reach from inside, again via the sunroof.

Not only incredibly dangerous, pulling off such a heist is risky as the team have no way of knowing if there is anything of worth inside, said Vogelsang.

Police estimate that around €250,000 worth of goods have been stolen through the method – mostly mobile phones, laptops and other electronics.

Vogelsang did admit that investigation into the trend was in the beginning stages and they were yet to develop a clear picture of who is carrying out the robberies. “There could be several groups operating,” she said.

What is known is that thieves seem to target parcel delivery vans, as there is almost always a chance of finding something good inside. The problem is, though, none of the delivery companies want to take responsibility if a “truck robbery” happens, Der Spiegel said.

Police in Münster have issued a leaflet informing drivers about the trend, warning them to be cautious of cars driving closely in front or behind for long periods of time.

For now, all investigators have to work off is a video taken by Romanian police in 2012 which shows an attempted motorway robbery.