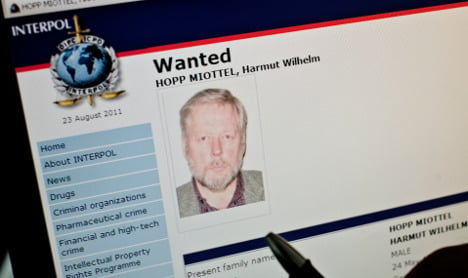 Hartmut Hopp, 68, was one of six leading members of Colonia Dignidad, a now notorious group which was so awful that human rights organization Amnesty International has been campaigning in Germany for him to be jailed.

“Normally we call for the release of prisoners. But in this case it is the other way around,” Klaus Walter from Amnesty International told The Local on Tuesday. He and others were handing out leaflets about the case in the western German city of Krefeld a couple of weeks ago.

Hopp has been home in Germany since May 2011, when he was one of six men convicted by a Chilean court of abetting child abuse for supplying children to the paedophile sect leader Paul Schäfer. The conviction was confirmed by Chile’s top court this January.

Hopp fled Chile for Krefeld after the court’s decision, and has lived there ever since with his wife, safe in the knowledge that the German constitution prevents the extradition of German citizens.

Even an international arrest warrant issued by Interpol on the request of Chilean authorities cannot trump this.

But the Kölner Stadt-Anzeiger reported on Tuesday that German prosecutors were not only pursuing their own investigation into Hopp’s actions in Chile – they were also awaiting a special request from Chile for Germany to execute the sentence of its courts.

“We are working on two tracks,” Klaus Schreiber, spokesman for the Krefeld public prosecutor told the Kölner Stadt-Anzeiger.

“For one, we are carrying out our own investigative process. As well as that, we are waiting for the Chileans to submit a request for the German Federal Republic to take over the prosecution. But this has not yet been done.”

That would mean Hopp serving his five-year jail sentence in Germany.

“Personally, and I have been following this case closely for 30 years, this charge of helping someone else to abuse children was not the real thing,” said Walter.

“He should be behind bars for murder or intending to murder, and the abuse of pharmaceuticals. He was drugging the prisoners and the inhabitants of the place for years. That’s what he should be in prison for.”

But he said it was difficult for the German authorities to look into those claims as they did not speak Spanish or have access to official Chilean documents, he added.

The German investigation into Hopp concerns his actions as the only doctor at Colonia Dignidad. He is accused of abusing medicines, giving high doses of psycho-active drugs to people without any medical need.

Hopp’s lawyer Helfried Roubicek said he was prepared to fully cooperate with the German authorities, but that he had worked in Chile in accordance to the laws of the land.

A row of allegations

Amnesty said that Hopp had moved to Chile in 1962 and helped to create the Colonia Dignidad, becoming one of the sect’s leaders during the 1970s, and acting as the leader Schäfer’s “right hand man”.

“As the only doctor of the sect Hopp led the hospital in which children were tortured with electric shocks and people were systematically sedated with psycho pharmaceuticals,” Amnesty said in its journal from December 2011.

“At the request of Schäfer he maintained close contacts to the military junta… Hopp probably played a central role in the cooperation between the regime and the Colonia Dignidad. For example when it was about torturing members of the Chilean opposition to death in the German enclave and making them ‘disappear’.”