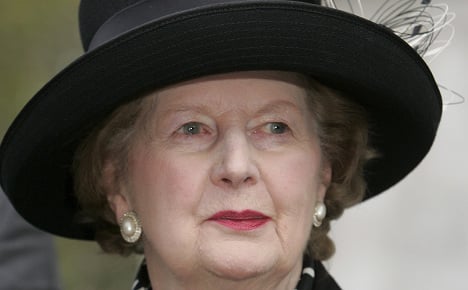 “She was an extraordinary leader in global politics of her time,” Merkel said in a statement. “I will never forget her part in surmounting the division of Europe and at the end of the Cold War.”

Merkel, a fellow conservative who was often compared to Thatcher when she became chancellor in 2005, said Thatcher would not be remembered as a “female politician” but one who had blazed a trail for women in the halls of power.

“As she took the highest democratic offices as a woman before that was common, she set an example for many,” Merkel said.

She said that Thatcher’s values and principles served as a beacon while Europe was still divided into opposing blocs.

“The liberty of the individual stood at the heart of her convictions – Margaret Thatcher recognized the power of the freedom movements of Eastern Europe early on and lent them her support,” she said.

“We will look upon her life’s work with admiration,” he said, adding that she had shaped not only British politics but that of Europe and the entire world.

“She has left behind a huge legacy in European and global history,” said Westerwelle, who belongs to the pro-business Free Democratic Party (FDP).

“I greatly valued Margaret Thatcher for her love of freedom, her incomparable openness, honesty and straightforwardness,” Kohl, considered the father of Germany’s 1990 reunification, said in a written statement.

Kohl, 83, who governed Germany for a record 16 years, said fellow conservative Thatcher was “an upstanding fighter and representative of the interests of her country.”

He referred to their “special relationship”, adding “we always had our ups and downs. And despite all the different opinions on many an issue, we had however until the end, above all, a respectful rapport.”

Kohl was a driving force behind European enlargement and integration in the years after the Berlin Wall fell in 1989 leading to German reunification which Thatcher initially vehemently opposed.

Shortly after news broke that Thatcher had died, British Prime Minister David Cameron announced that he would be cancelling the rest of his tour of Europe which he started in Madrid this week.

He was supposed to be pressing his case for reform of the European Union ahead of a referendum on his own country’s membership of the bloc. Instead, he will pay his respects to Britain’s first female premier at her funeral in London.

Cameron was meant to visit Berlin at the end of the week for “further discussions about taking forward his (EU) reform agenda,” Downing Street said.

Britain sent shockwaves through the EU in January after Cameron set out plans to wrest back powers from Brussels and to then put Britain’s reshaped membership to an in-out referendum by the end of 2017.