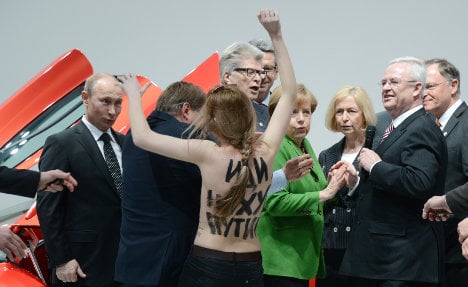 Putin and Merkel were taking in a presentation of a new car model at the Volkswagen stand by the company’s chief executive, Martin Winterkorn, when the four bare-breasted women started chanting “fuck dictator”.

At least one of the women had the same words painted in black ink across her torso and “Go fuck yourself, Putin” in Russian on her back. The demonstrators were eventually overpowered by security personnel.

Click here for a photo gallery of the protest (WARNING: NUDITY)

Merkel and Putin were attending the Hanover Messe in northern Germany where Russia is this year’s guest country.

At a press conference later the two leaders, whose personal rapport is notoriously strained, crossed swords over recent Russian probes of a number of international NGOs including German think tanks.

“I noted that we support a vibrant civil society,” Merkel told reporters. “We spoke about the raids at the political foundations and I said that we are afraid that as a result the NGOs cannot thrive in the way we would like.”

Putin insisted the searches had been justified as Russia had a right to monitor the activities of foreign groups on its soil, and asked whether the organisations funding could not be put to better use.

“That money – a billion dollars is not small change – could have been sent to help problem countries, including Cyprus,” he said.

“And then there would have been no need to fleece unfortunate depositors,” he said, in a reference to a German-orchestrated bailout of the eurozone member with stipulations that saw major account-holders including Russian citizens lose a chunk of their assets.

He brushed off the topless protest, saying with a wolfish grin that he had “liked it” but remarked: “But it’s better not to upset the order. If someone wants to have a discussion on some political issues then it’s better to do it while you are dressed, and not take your clothes off.”

He added: “You should take your clothes off in other places like nude beaches.”

Last Thursday bare-breasted activists from the Ukrainian women’s power group Femen staged rallies in front of mosques and Tunisian embassies across Europe against what they called Islamist attacks on Arab women’s rights. It was not clear whether the women in Hanover were Femen members.

The leaders also covered North Korea with Putin welcoming a US decision to delay the test of an international ballistic missile to avoid stoking tensions with North Korea.

“We should thank the United States for this important step,” Putin said, adding that any military conflict on the Korean peninsula had the potential to be worse than the 1986 nuclear disaster in Chernobyl.

“If something happens, God forbid, (then) Chernobyl which we all know about very well would simply seem like a children’s fairy tale,” he said.

Merkel said they had also discussed Syria’s vicious civil war and noted persistent differences between the European Union and Russia, which has continued to back the regime of President Bashar al-Assad.

She underlined the German desire for a “political solution” to the conflict.

“In my opinion, what should we do – we should try to achieve a halt of arms supplies to all sides in the conflict,” he said.

“That is the first thing. The second thing – when they say that Russia is supplying some sort of arms… we are supplying to a legitimate regime. This is not prohibited by any international decisions. But we are ready to get together and discuss with everyone how we can get out of this bloodbath.”

Despite the friction, Merkel stressed her support of a “strong strategic partnership” with Russia.