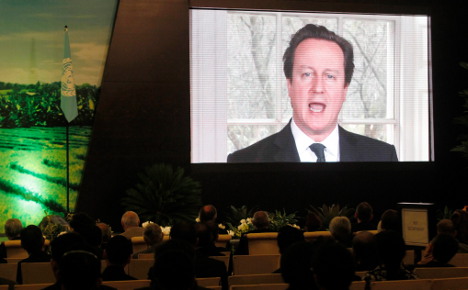 Before leaving for the trip on Monday he said he expected the 27-nation grouping would have to submit to treaty change despite top EU officials previously saying there was no appetite for it.

His tour began early on Monday with his first official visit to Madrid since taking office in 2010, after which he was due in Paris on Monday evening for a working dinner with Hollande.

Cameron will visit Berlin at the end of the week for “further discussions about taking forward his (EU) reform agenda,” Downing Street said.

Cameron sent shockwaves through the EU in January when he set out plans to wrest back powers from Brussels and to then put Britain’s reshaped membership to an in-out referendum by the end of 2017.

In an interview with five European newspapers including the Süddeutsche Zeitung published on Monday, Cameron called on the EU to bring in “change that all of Europe can benefit from”.

“I think this organization is ripe for reform. I think we’re in a global race where we have to compete with (countries like) India, China, Indonesia and Malaysia,” he said.

He cited the agreement by EU leaders in February to cut its 2014-2020 budget as an example of recent reformist moves by the bloc.

Cameron said he believed alterations to the EU’s treaties would also be likely. He spoke with journalists from France’s Le Monde, Italy’s Il Sole 24 Ore, Spain’s El Mundo and Poland’s Gazeta Wyborcza as well as the Munich-based Süddeutsche Zeitung.

EU president Herman van Rompuy warned in February there was no appetite among EU leaders for any major treaty change, insisting the focus in coming years would be on shoring up the eurozone — the 17 countries that use the single currency that Britain is not part of.

But Cameron insisted: “I think there will be treaty change.”

The British premier would also discuss Syria with the three EU leaders and was “keen to find ways to advance a political solution and to up the pressure on [President Bashar al-] Assad to make him realize there is no military solution,” Downing Street said.

He would also discuss his priorities for this year for the G8 group of industrialized nations, of which Britain holds the rotating chairmanship, including EU-US trade, tackling tax avoidance and greater transparency, Downing Street said.

Britain hosts a meeting of G8 foreign ministers this week.