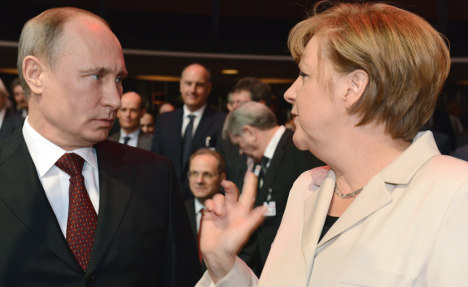 The two leaders were opening the Hannover industrial trade fair where Russia was the partner country. Dozens of demonstrators protested against Putin’s crackdown on NGOs outside the northern German city’s convention centre where the opening ceremony was held.

Click here for a photo gallery of the protest (WARNING: NUDITY)

Merkel’s statement, made in a much-applauded opening speech, was a direct reference to Russian probes into a number of international NGOs including German think tanks – moves criticized by Moscow’s partners.

In an interview with German public television station ARD, broadcast on Sunday, Putin defended the crackdown, arguing that Russians had a right to know which organizations that set up shop in the country were receiving foreign funds “and for what”.

In her speech Merkel insisted on the importance of an active civil society in Russia.

“Russia wants to diversify… and we want to help it,” she said adding that a key element of the diversification of the economy was innovation.

“We are convinced that this is particularly successful when there is an active civil society,” she said.

Outside the Hannover convention centre about 100 demonstrators called on Moscow “to leave the NGOs alone”.

The protest was organised by Amnesty International and Human Rights Watch.

Merkel, who was to dine with Putin after the opening ceremony, said discussions about the conditions under which civil society must be able to work should be pursued.

The chancellor had taken Putin to task during a visit to Moscow in November when she criticized the sentencing of two of the members of punk-rock group Pussy Riot to two years in prison camp after they were convicted of “hooliganism motivated by religious hatred” in a church performance.

Schröder, Merkel’s immediate predecessor, turned 69 on Sunday and has long been friends with Putin.