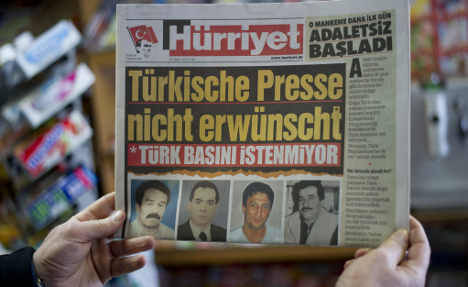 Gabriel, who made his comments in the Bild am Sonntag newspaper, is the latest to speak out in a growing row over press access to the Munich Higher Regional Court for the Beate Zschäpe trial.

She is said to be a crucial member of the National Socialist Underground, a neo-Nazi group accused of nine racially motivated murders and the killing of a policewoman.

There was outrage both in Germany and abroad when it was revealed that all 50 media seats in the courtroom were assigned to German media – even though eight of the victims had Turkish roots.

Gabriel said he could not understand why neither Bavarian state authorities nor the federal Justice Ministry had got involved in the controversy. He said the conflict has hurt Germany’s image abroad, made the whole thing look like a “farce” and made “Germany look like the laughing stock of the world.”

Several German media outlets, including Vorwärts had said they would give their seat up to a Turkish colleague if the court would accept that, which remains unclear.

The court has said the seats were assigned on a first come first serve basis. A Turkish newspaper said it planned to file a complaint with the Constitutional Court.