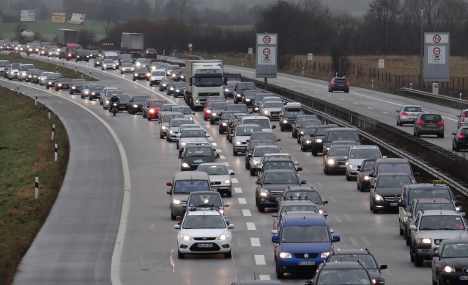 Working off data provided by navigation system maker TomTom, the study found the Swabian metropolis ranks eighth worldwide in the list of cities most plagued by heavy traffic.

The commuters in Stuttgart are on the road 33 percent longer on average compared to driving in gridlock-free traffic, the study found. This puts Stuttgart, which is home to carmakers Mercedes and Porsche, on par with cities like Los Angeles, Paris, Sydney and Rome on the traffic jam scale.

The TomTom study for the year 2012 was based on actual driving time and encompasses the complete road network of a city. Six billion pieces of data were evaluated from the company’s traffic data bank.

Out of the 161 cities that were a part of the worldwide study, Moscow takes the first place as having the worst traffic congestion. Commuters in Moscow are in transit 66 percent longer than in normal traffic conditions. The second and third places were taken by Warsaw and Istanbul.

The study also calculated that for every hour of travel time in Stuttgart, Germany’s sixth largest city, commuters need to plan in 20 minutes of idle time. And in rush-hour traffic, every journey takes 38 minutes longer for every hour than in normal traffic flow.

All in all, travellers in the Stuttgart area spent 89 hours in congested traffic conditions in 2012. That makes the capital of the state of Baden-Württemberg sixth over all in Europe for the longest periods of idle time.

The heavy traffic situation is similarly grim in German cities like Hamburg, which takes up the ninth worst spot on the European list, Berlin came 13th and Cologne 16th.