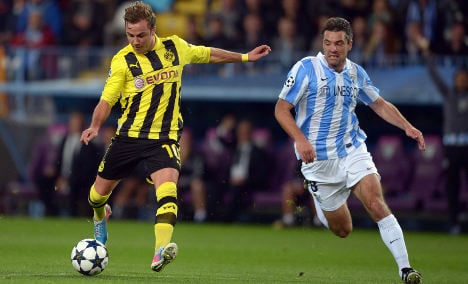 The 20-year-old central midfielder squandered two clear chances to grab a valuable away goal on Wednesday night and means there is still all to play for in Tuesday’s second leg in Dortmund.

“We had huge chances, especially for me personally,” fumed Götze, as Dortmund shaded the total shots on goal with 13, compared to Malaga’s ten.

“I definitely should have scored two goals, it clearly wasn’t my day and I could have done more to help the team,” he said. “If we had known before the game that it was going to be a 0-0 draw, we’d have taken that, but the way the match went, it’s a bitter result to swallow.”

Although Dortmund are now the only team undefeated in this season’s competition, this was their fourth draw in their nine Champions League matches and Borussia boss Hans-Joachim Watzke admitted they lacked the killer punch.

“Once again, this was 90 minutes when we didn’t manage to score,” said the Dortmund CEO. “We lacked the killer punch, but we have won all our home games in the Champions League so that’s a good omen for Tuesday.”

Coach Jürgen Klopp saw matters differently, pointing out that his team showed maturity to stay calm despite the frustration of failing to convert chances into goals.

“After we didn’t take our chances, this was a further stage in our development to stay calm and take the result,” he said.

“We talked about this during the break, we had our finger on the trigger, played some great football and adjusted to the level of our opponent. Being under pressure was no problem for Malaga, but we have to live with the result, it was a good game for us against a difficult opponent.”

“There was more than just a goalless draw, it’s a dangerous result,” said the 33-year-old. “An away goal for Malaga would mean that we have to score twice.

“At the end of the day 0-0 is okay, we have the chance to correct things at home.”