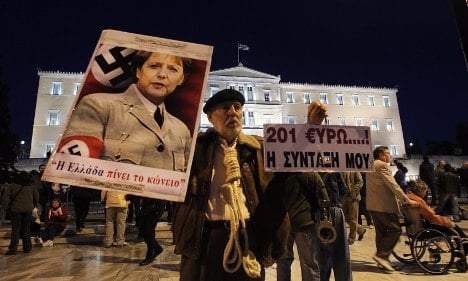 took offence over tasteless demonstrations in bailed-out countries such as Cyprus and Greece.

Only 16 percent found the protesters’ ire at Germany, the main benefactor for such rescues, to be justified.

Posters showing Merkel in a Nazi uniform or with a Hitler moustache have been spotted at anti-austerity rallies on the streets of Greece and Cyprus and received wide coverage in German media.

Opponents of drastic cuts in public spending introduced as a condition of receiving loans to grapple with crushing public debt have blamed Germany for dictating the tough terms.

Merkel, along with supporters from other eurozone countries with top credit ratings, argues that fiscal discipline is the only way to head off future debt crises.

The poll solicited opinions from a representative sample of 1,001 Germans on March 26-27.