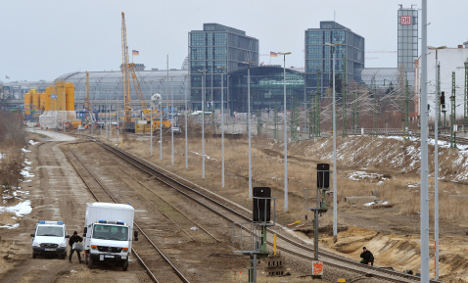 A police spokesman said explosive experts had managed to defuse the Soviet bomb where it was, lying near tracks close to Berlin’s Hauptbahnhof in the centre of the city.

“The operation to defuse the device took about half an hour,” the spokesman

told the AFP news agency. “Everything went according to plan.”

But the bomb caused havoc to rail traffic in the German capital.

“Travellers should be prepared for delays and diversions in long distance train traffic,” a Deutsche Bahn spokesman told the Tagesspiegel newspaper.

In particular, long-distance trains as well as those travelling between the capital and cities such as Hamburg and Rostock were expected to affected throughout the day.

Trains heading south from Berlin were diverted to other tracks which could lead to delays of up to half an hour, the spokesman said.

The suburban S-Bahn trains were not expected to be affected.

The bomb was found on Tuesday evening – near tracks which run north of the train station.

Several houses near the bomb were evacuated in the morning, with the evacuation zone set to be extended as experts move in to defuse the bomb. This is likely to include the closure of several roads.

The bomb was discovered during a routine munitions search in the area. Explosives from the Second World War are still regularly found across Germany.