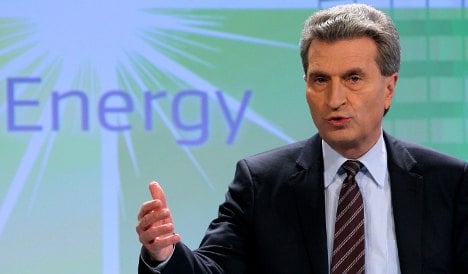 Günther Oettinger, Germany’s designated EU commissioner, criticised his country’s scepticism of fracking, telling the Frankfurter Allgemeine Zeitung that research had fallen victim to the “emotional” debate over the issue.

The government in Berlin is planning legislation to regulate the use of hydraulic fracturing, commonly referred to as fracking. The process uses high-pressure substances, including water, sand and chemicals, to dislodge natural gas from rocks deep underground.

Critics of fracking point to the environmental risks, saying it can cause polluting chemicals to leech into groundwater.

Members of Chancellor Angela Merkel’s centre-right Christian Democrats have reportedly been mulling whether to make the draft law on fracking even tougher, including a temporary freeze on new permits.

In his interview with FAZ, Oettinger said Germany must be prepared to take certain risks to remain competitive – and would be wise not to discount fracking altogether.

“I recommend that Germany, too, not say a firm ‘no’ to fracking,” he remarked. “Otherwise we will lose key competencies.”

The fracking business is booming in the United States, leading to lower energy prices and prompting a wave of investment from abroad, including from Germany’s biggest energy provider, E.on.

Germany’s Environment Ministry has estimated the country’s own natural gas reserves from rock sources like shale at about 1.3 trillion cubic metres – enough to meet Germany’s natural gas needs for the next 13 years.