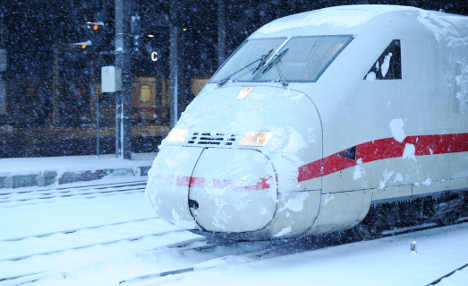 The ICE train was near the town of Idstein in the central state of Hesse when it ground to a halt in the tunnel – and stayed there for nearly four hours.

The train had set off from Frankfurt shortly after 8pm on Monday and mysteriously stopped about half an hour later.

“The train was full, all the seats were occupied,” Uta Böhme, a doctor on board told the online edition of Der Spiegel magazine.

The lights went out for about ten minutes and afterwards passengers wishing to relieve themselves discovered all the toilets were locked as a result of an overflow.

“The air conditioning failed and it became warm,” Böhme said.

Repair work was carried out on the tracks and the train was eventually towed away, allowing passengers to continue their journeys on another ICE train shortly after midnight.

A dead bird found on the scene is thought to have flown into the overhead lines causing a short circuit.

The tracks between Frankfurt and Cologne were only operating in one direction for some time, but a spokesperson for Deutsche Bahn said service in both directions resumed in the course of the night.

Some delays were reportedly still affecting commuters on Tuesday morning.