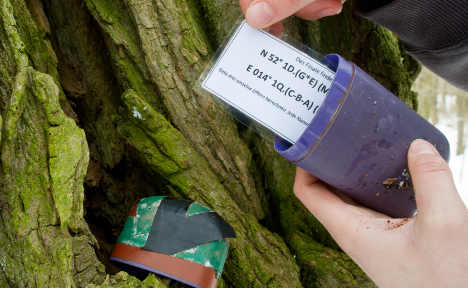 It’s called “geocaching” and originated in the United States in 2000, when computer consultant David Ulmer decided to test the accuracy of new GPS technology by hiding a target in the woods. He posted the co-ordinates of a black bucket which he left near Portland, Oregon online.

Within three days, two people independently found the bucket using their GPS devices. Ulmer left some prize items inside, including videos, books, some software and a sling shot.

Originally known as the “Great American GPS Stash Hunt,” the practice has grown with the advent of GPS technology on personal devices and has become known as “geocaching” to remove any negative association with the term “stash.”

Now enthusiasts log onto a geocache website to add the co-ordinates of their own containers of hidden treasure.

The “treasure” could be anything from a bottle of beer to a bird house. Those laying the cache leave a log book for finders to record the date and time of their discovery. The status of the treasures is monitored online.

And the hunt is picking up steam in Germany, where there are now more than 280,000 geocaches recorded on the national edition of geocaching.com. While most objects are left by individuals, companies are increasingly getting in on the game, often with the hope of advertising tourist destinations.

“The exciting thing about geocaching is that you can find things all over the place, not just at castles or palaces,“ says Monique Müller, a forest ranger in the Sauener forest, who started laying geochashes four years ago.

Müller encounters many geocache enthusiasts in her line of work. “There are a lot of school classes that come here, but also older people who are looking for the trickier hiding places.”

“The geocache community is based on trust,” she said. The objects have to be left several meters away from each other and are not allowed to be buried, added Müller.

The first German geocache originated in the north-eastern state of Brandenburg. In October 2000 a biscuit tin was buried at Königs Wusterhausen, south of Berlin. There are some 9000 caches in Brandenburg and around 3000 in Berlin.

“I think geocaching is the perfect way to get to know an area; for example I found a secret bathing place” says 22 year-old Thekla Noack, who discovered her passion for geocaching while spending a year volunteering at the August Bier foundation. She hides most of her caches around trees.

Lutz Weichelt offers safari tours around Brandenburg and leaves bottles of brandy and champagne for his groups to find. “It would be too difficult for my groups otherwise,” he says, adding “After all, it’s supposed to be fun.”

Geocaching is not always as easy as it seems. GPS is not entirely accurate and bad weather and poor terrain can make the search difficult.

“It’s a science of its own,” says Noack. “But it allows you to discover things that hikers would simply pass by.”